Lahore (Muhammad Yasir)  The first Thar Foundation All-Sindh Female Football Tournament ends with an exhilarating show of sportsmanship, skill and dexterity in the final, in which Tharparkar Terminators beat Karachi Royals by 2:1 in penalty kicking. It was but a high-strung play as both the teams came very hard on each other, causing the match to end at zero goal, leading to the decision through penalty kicking.

The Thar Foundation in collaboration with Diya Women Football Club hosted the 3-day football tournament – played from December 23rd to 25th at Thar Coal Block II, Islamkot – focused on under-13 females of Sindh. The tournament, organized by the Foundation’s education wing, brought together female teams from across 8 districts of Sindh including Karachi, Mirpurkhas, Hyderabad, Sukkur, Khairpur and Hub. It was based on the Foundation’s initiatives to empower the Thari girls and women through its various initiatives.

The event was graced on the 2nd day by the Provincial Minister of Women Development, Shehla Raza. She celebrated the involvement of Thari girls in such avenues and was appreciative of the efforts of Thar Foundation which is not only focusing on educating the girls but also providing them with avenues which can help them actualize their potential. 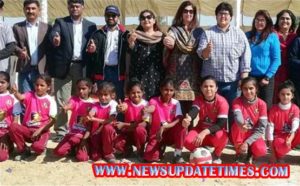 “We saw football teams of all the 8 districts in action. It has been a treat to watch them play with such skill and dexterity,” said Sabeen Shah, Manager Education, Thar Foundation. She further added, “Thar Foundation is focused in its mission to not only educate the female population of Thar but also provide them with other avenues for their empowerment. Alongside providing them opportunities to develop their skills through sports, the Thar Foundation schools are also providing these girls with access to karate and other life-skills.

On the last day, Karachi Royals won the first semi-finals against Tharparkar Thunders by 1:0 goals. For the 2nd semi-final, Khairpur Knights and Tharparkar Terminators were to play against each other, but, with a twist of events, Knights were disqualified over lack of adherence with the rules and the Terminators got a walkover, pushing them to the finals.

In the finals, after a real tough competition, Tharparkar Terminators beat Karachi Royals by 2:1 in penalty kicking sessions. It followed a ceremony of songs and music where all the players and community present danced to the famous international football songs and some traditional Sindhi tunes. The celebrations were also due to the fact that the 02 Tharparkar teams managed to secure positions in the top three teams. Earlier, Thar Foundation with the help of the FIFA-approved Diya Women’s Football Club organized its pilot Inter-School Female Football Tournament in June 2018. Vast majority of individuals claimed to love and appreciate this initiative and said that this tournament was a significant beginning towards woman empowerment and the fact that such avenues and opportunities were being created for the women folk in Tharparkar.