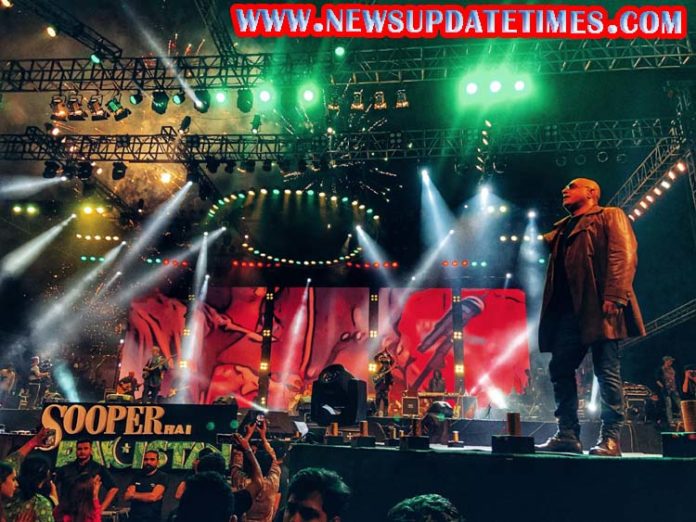 Karachi (Muhammad Yasir)  On 25th December 2018, Karachiites were treated to the most awaited concert of the year featuring Pakistan’s biggest Sufi rock band, Junoon. The event – which was organized by leading biscuit brand, Peek Freans Sooper to celebrate Pakistanis’ passion for their country on the birth anniversary of Quaid-e-Azam as well as to commemorate nearly 30 years of Junoon’s music – was declared a roaring success as it not only kept the audience singing along to the nostalgic tunes loud and proud, but also proved to be an awe inducing showcase of live effects and animation.

Although there have been countless large-scale concerts throughout Pakistan’s history, a recent lull in the frequency of such events threatened to derail and completely submerge its live entertainment scene. The Sooper Junoon concert proved to be the impetus needed to jumpstart that trend once again.

The event was a star-studded one with popular celebrities such as Wasim Akram, Zohaib Hassan along with an army of other celebrities and personalities in attendance. The much talked-about Ladies Only Pink Circle, which even Ali Azmat acknowledged on-stage as a first, was the crowning glory of the event while other enclosures were packed with people of all ages, all of whom had come together to see Junoon’s reunion after a long halt of 13 years.

With a massive stage set for the Sufi-Rock Kings, the host for the evening, Faizan Haque, kick-started the event with Pakistan’s top DJ, Faisal Baig, whose Classic Rock music set helped build the mood for what was to come later. Following him were four brilliant opening acts, namely Lyari Underground, Khumaariyan, Tamasha and Sounds of Kolachi, every band making its own mark with the audience and leaving them yearning for more.

With the appearance of each live act, the anticipation of the crowd for Junoon’s first live act in years grew, eventually getting to a point where it seemed like they just couldn’t take any more. However, once Junoon took to the stage, the evening took a turn from absolutely amazing to dream-like spectacular. With an incredible light show that was accompanied by L.E.D graphics and animations playing on three humongous screens which in their entirety spanned more than 200 feet in length, the audience was completely swept away by the entry. ” Wow! Look at all these people!” was the band’s first words on stage after 13 years when they saw the more than 10,000 in attendance.

Junoon began with a tribute to the Father of the Nation before going on to perform iconic hits such as ‘Khudi’, ‘Sayoonee’, ‘Saaien’ and countless others. The band then came full circle with a beautiful tribute to Junaid Jamshed in the form of a heartwarming performance of ‘Dil Dil Pakistan’, thereby filling the atmosphere with great emotion and nostalgia.

Perhaps the most memorable moment of the concert was when Salman and Ali veered away from the script to sit down on the stairs of the stage and do an impromptu performance of the legendary hit, ‘Wish You Were Here’; their way of paying tribute to global icons, Pink Floyd. From there they entered their classic hit ‘Chalay, Chalay Thhay Saath Saath’. To everyone’s surprise, Ali didn’t sing the last line of the song, a rare display of emotion by the rock star, which pushed many in the audience to tears again. He turned away from the audience and said, “They ask that ‘oooh Ali what does this reunion mean to you…and I go, meh it’s the usual’, but – this reunion…”, and just left it at that, simultaneously echoing the feelings of everyone in attendance. 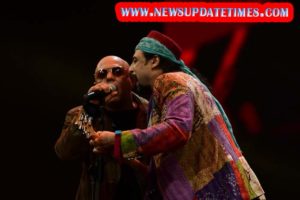 Even with such a fantastic presentation of raw sentiment and emotion through the power of music and lyric, nothing could prepare the massive crowd for what was next in store. For the band’s last performance of the evening, Jazba Junoon, the audience was treated to what was, arguably, the longest and most brilliant firework show in recent history. The event concluded with the singing of the National Anthem with everyone gasping and cheering in awe as massive green fireworks appeared, just as they played the last note. The coincidence of the timing escaped no one. Maybe it was all planned to perfection. Goosebumps.

It is no doubt that Peek Freans has, once again, exceeded expectations with the Sooper Junoon Concert and given the people of Karachi an evening where they were left both dazzled and awed by legends and newcomers alike. One hopes that EBM – the makers of Peek Freans – are able to come up with even greater initiatives for the future and thus make good on their promise of promoting all that is great about Pakistan.