Karachi (Muhammad Yasir)  “The seed and idea of literature festivals caught on and spread like wildfire in a forest where it seems that a fuel of parched trees was waiting for it”. These thoughts were expressed by Ameena Saiyid OBE, SI, Chevalier des Ordres des Arts et des Lettres, Founder and Director Adab Festival Pakistan, at the closing ceremony of first Adab Festival Pakistan.

The three-day Adab Festival Pakistan (AdabFest) featuring writers, poets, showbiz figurers and journalists concluded on Sunday. On the third & last day of AdabFest, thousands of literature lovers attended the festival. People of all ages attended the festival, including avid readers, writers, academics, and literary figures from across Pakistan and the world for the 3rd day of the festival, which began on Friday at the Sindh Governor House, Karachi.

Addressing the participants at the closing ceremony the, Ameena Saiyid said that AdabFest was a unique event but hoped it would not remain so. “For me AdabFest is a movement to spread peace and harmony through expression: that is through books, dialogue, debate, art, music, storytelling, and dance and through watching, listening, and asking questions,” she said. 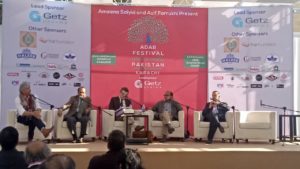 In his concluding remarks, Founder & Director of Adab Fest Asif Farrukhisaid that theses 3 days were full of magical atmosphere with discussions, book launches, theaters, dramatic readings, music and through all this a wonderful answer was given to all those who were against the magnificent backdrop of this monumental location. He said this was made possible by the efforts of a very small team. He apologized for all the short comings and said that the real triumph is the way we managed to do anything at all against all odds as it took us a very painful route to reach here. He felt guided by the courageous example of Fehmida Riaz. He also acknowledged Kirshna Sobti who was born in what is now called Pakistan and is connected to us through her knowledge and historical vision. He also acknowledged Altaf Fatima and ended in the words of Khalida Hussain saying that ‘writing represents the love of life’. 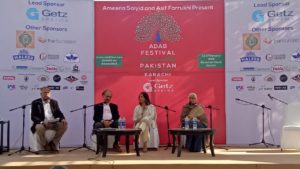 CEO Getz Pharma, lead sponsor of AdabFest, Khalid Mehmood in his concluding speech said “Getz Pharma from its very inception in 1995 has always played its role to support literature and preserving our cultural heritage, as envisioned by our founding fathers for a peaceful and progressive country. Our support as lead sponsor of the Adab Festival is part of the larger mission of encouraging tolerance, dialogue and nation building without which neither the industry & the economy nor other institutions can sustain and prosper.”

Before the closing ceremony, the third day started with the session ‘Ushering in a new area of youth activism: Hope or despair?’ with participants Faisal Siddiqi, Jibran Nasir, Alia Amirali and moderator Palvasha Shahab. The panel engaged a diverse spectrum of activists and their perspectives on the opportunities for activism that can be seized or created in moments of rupture and/or system breakdowns. It was particularly interested in exploring the potency in such moments for mobilizing youth driven movements. The panel discussed the unique sets of possibilities and opportunities that can be teased out in the Pakistani context. Pakistan operates under a certain degree of anarchy, and a continuing lack of access to justice. Given this, it was discussed as to how can we engage in effective activism to address this? When can moments of breakdown be harnessed to our advantage? What are the strategies that can be employed to raise our voices, to keep hope alive, and to emerge victorious despite the discouraging circumstances? Where can the nexus between judicial activism, advocacy and social political activism be exploited to empower the marginalized? Why is it important to bring the marginalized into the fold of ‘rule of law’?

In the session ‘Pakistan in the second globalization (we missed out on the western led post 1980 wave: can we catch the bus on the second, China led one?) the speakers Mushtaq Khan, Asad Sayeed, Ehsan Malik, Saquib Shirazi engaged in a thought provoking discussion with the moderator Salim Raza.

Later, a dramatic presentation on P.G. Wodhouse by Richard Heller was given which was moderated by Lynette Viccaji. Parallel book launch session were held where Hani Baloch’s ‘Zind ak aadink’ (the mirror of life) was discussed by Sheema Kermani and Amar Sindhu with the author and Aleeya Khan ‘House’ was discussed by moderator Basit Usman with the author.

In the session ‘Education emergency: 22.6 million children out of school: expanding partnerships or shrinking space for private sector’ it was discussed that as per government statistics, 22.6 million are children out of school. According to recent surveys, children in school are not learning well. How do we address the challenges of access, equity, quality and governance? On one hand we have the successful launch of the government-financed Education Management Organizations (EMOs) in Sindh through the PPP Node, seeking support of non-state actors to manage new and old government schools and teacher-training facilities. On the other there has been rising judicial activism to protect families from private-sector school fee increases. The New Deal 2018-2023 speaks about a ‘robust yet flexible’ framework to streamline efforts of private actors to ensure value for money in teaching quality, recruitment, infrastructure, school management etc. What is the score so far in Naya Pakistan in its very early days ? Is there a trend towards expansion of partnerships or shrinking space for the private sector?  Speakers Zobaida Jalal, Shahid Siddiqui, Shehzad Roy Salma Alam, Faisal Mushtaq Ameena Saiyid discussed all these burning issues with moderator Baela Raza Jamil.

In the session ‘A conversation with Ahmed Rashid’ speakers Zahid Husain and Fatemeh Aman had an interesting discussion while in a parallel session ‘Dilli jo ek sheher thha’, Asif Farrukhi will talked with Zehra Nigah and Saif Mahmood (author of Beloved Delhi) about Mughal Delhi, its syncretic culture and its great Urdu poets from Sauda and Mir to Ghalib and Daagh.

The session ‘Life in Karachi during Ayub Khan’s rule’, a 30-minute talk was led by Lt Col Ian Vaughan-Arbuckle, followed by conversation with Ghazi Salahuddin and Sher Shah Syed.

In the session on the launch of Urdu translation of Alys Faiz’s memories, ‘Kab yaad main era saath nahin’, speakers Nayyer Rubab, Zehra Nigah along with Sania Saeed viewed a short film on Alys Faiz with the moderator Moneeza Hashmi. At the book launch of Farooq Bajwa’s ‘From Kutch to Tashkent: The Indo-Pakistan War of 1965’, speakers Syed Javed Husain, Nauman Naqvi had an intriguing chat with the author along with the moderator Omayr Aziz Saiyid. At the book launch of Aysha Khan’s ‘The women’s movement in Pakistan: Activism, Islam & Democracy’, speakers Anis Haroon, Amar Sindhu,  Uzma Noorani, Sultana Siddiqui discussed the book’s details with the author with moderator Kausar Saeed Khan.

In the session ‘What about the rest? Challenges and strategies in National league pedagogy’, speakers Suleman Shahid, Inam Nadeem, Zahid Hassan, Imdad Husaini along with the moderator Gwen Kirk discussed that the mother-tongue of most Pakistanis is not Urdu, but too few institutions teach Balochi, Pashto, Punjabi, Sindhi etc, as second languages. The rare institutions that are developing programs to teach these face not only academic and infrastructural, but also ideological challenges questioning the value of teaching these languages, and the skills required to teach them. Teaching diverse Pakistani languages as second languages can contribute to a more just and interconnected society. How can teachers develop material to serve both heritage and non-heritage students? How can digital technologies help?

In the session ‘Stefan Weidner’, it was discussed how the Islamic tradition can help us to deal with exile & alienation and origins and recent developments in German public discourse. This included a lecture by the German writer, intellectual, translator (from Arabic) and former editor of the cultural magazine “Fikrun wa Fann”. The session was moderated by Kamran Asdar Ali.

In the much awaited session ‘Transformation and Resistance: The challenging art landscape in Pakistan’, Salima Hashmi, Mohammad Zeeshan, Adeela Suleman with moderator Rabeya Jalil discussed the diversity and depth of art-making in Pakistan was evident in the Karachi and Lahore biennales.

In the session ‘Pakistan’s population prerogative: A talk by Mehtab Karim’, Asif Iqbal, Naeem uz Zafar discussed details with moderator Yasmeen Kazi that the 2017 census results indicated that during the past 20 years, Pakistan’s population has been growing @ 2.4% per annum, and in 2018 has exceeded 213 million, adding about 79 million people during the last 20 years. The 2017-18 Pakistan Demographic & Health surveys results have been equally alarming, indicating that fertility rate in Pakistan has remained much higher than other South Asian countries. The rapid population growth rate in Pakistan has resulted in poor health indictors particularly of women and children; increasing number of illiterates; keeping poverty level high and rapid urban growth.  The session discussed the results of the 2017 census and its resultant social and economic consequences.

Depilex College of Cosmetology Hosted the Graduation Ceremony of Their Scholarship...