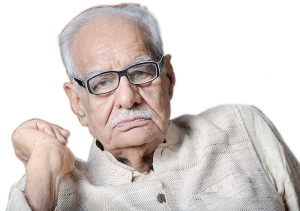 Another school has been burnt down in the Valley. This is the 25th in the last two months. What it conveys is that those who are fighting for separation from India are not interested in education. They want the boys to turn into stone-pelters. How does this help the youth?

I was recently in Srinagar and talked to some of the stone-pelters. They said they wanted an independent Islamic state and that India should recognise this. I told them that we were already exasperated of one Islamic state. How did they expect India to help them establish another one on its border? They said that this was your problem, not theirs.

Their demand questions the partition itself. When the paramount position of the British lapsed, it was left to the ruler to accede to any of the two countries, India or Pakistan. The Maharaja of Srinagar wanted to stay independent but when the regular and irregular soldiers of Pakistan came right up to Baramulla, he acceded to India.

But India’s first Prime Minister, Jawaharlal Nehru, had promised to hold a plebiscite as soon as peace returned to state. True, things are normal in a way but everything can be upset if and when the people’s consent is enumerated. It would not be India versus Pakistan but the Gita versus the Koran.

The youth may not be aware of all this but since more than 90 percent people in the valley are Muslims, their natural desire is to establish an Islamic state. I told the boys that any change in the borders of India would have to be approved by its parliament. But apparently this argument of mine did not satisfy them.

In the heart of Srinagar, some Pakistani flags are flying even today. But this is to irritate New Delhi. What they want is their own country which naturally would be Islamic. New Delhi has woken up to the problem and Home Minister Rajnath Singh has visited Srinagar to assess the situation.

Apparently, he has not liked what he saw. New Delhi’s response has been to send more forces to Srinagar. The fact is that even the Hurriyat leaders, who represent separatists, did not want to meet the Home Minister. Obviously, there is no meeting point.

Former state chief minister and National Conference leader Farooq Abdullah, who is all brim and stone when not in power, has said that the Indian leaders should meet the Hurriyat representatives and hold talks with Pakistan. Why couldn’t he or his son Omar Abdullah pursue this line of thinking when they were in power?

The Indian parliament should discuss the problem threadbare. It is not facing the fact in the valley. True, the very accession is being questioned. But the situation was worse when Sheikh Abdullah, the popular Kashmiri leader, joined India. He even organised the Kashmir militia to fight the Pakistani troops.

If the Sheikh could influence the Kashmiri opinion at the time when the question staring at him was either to join secular India or Islamic Pakistan, why the Mehbooba government, which has come through a free and fair electoral process, is not able to rally people around her? She is right when she says that only a few miscreants were creating trouble. But the others, the majority, is keeping quiet and posing the real problem.

New Delhi has not realised, more so under the Narendra Modi government, that the Sheikh’s charter of autonomy has long been thrown out of the window. All the promises that were made to him before the accession have been violated in letter and spirit. It is New Delhi’s will that is prevailing, not that of the valley.  New Delhi should have realised by this time that the closer Srinagar comes to India, the farther it goes away from the minds of the people. It is a make-believe situation but it matters since it gives a vicarious satisfaction to the valley that it is free and separate.

The Sheikh was able to keep this aspiration alive because he did not allow New Delhi to tinker with autonomy, beyond the subjects of Foreign Affairs, Defence and Communications. The Mehbooba government would have liked the same arrangement but it has to give leeway to New Delhi since Mehbooba is dependent on the BJP to stay in power.

New Delhi could help her by allowing Mehbooba to act independent. But the BJP government, which is guided by the RSS, does not want to give the impression that Kashmir was in any way more independent than the other states in the country. The party is not mindful of the autonomous status of Kashmir because it is opposed to the entire philosophy of Nehru that some parts of the country can have their own constitution and the flag. That was the spirit which guided Kashmir to convene the constituent assembly and approve of what the Sheikh had promised.

The first thing the state constituent assembly did was to endorse accession and said that the alliance with India was final and cannot be challenged. This is only on paper because the reality in the valley has changed. The youth has gone a different way.

By burning down schools the youth has, no doubt, expressed their anger. But must it visit on schools which are the places for learning? By reducing them to mere stones and ashes does not help. The idea of separatists may be to get the students back on the streets and resort to stone pelting. This is a sad scenario and seals the future of students. It is for them to realize that without education they will have no other go except what they are being goaded to do.

India is a vast country which offers various opportunities. Education gives students the tool which they can use in the job market. Surely, stone-pelting cannot be a tool by any stretch of imagination.

Re-emergence of PPP (By Hamid Waleed)