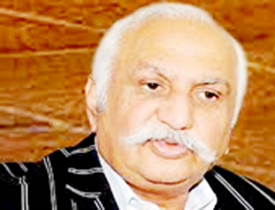 If the records and cassettes of master ghazal singer, Mehdi Hassan, were not pirated, he would not have needed anybody’s help today on his sickbed. He would have been a millionaire in terms of dollars from his royalty earnings. He is not an isolated case. Many singers, musicians, writers, film and television producers and even poets have suffered because of piracy, poor implementation of copyright laws and a lack of awareness among these artists about the protection of their intellectual property rights.

Although these people did not lobby for the protection of their rights, a light can still be seen on the other side of the tunnel. This light has been lit by the growing international pressure and a strong lobbying by the foreign and local industries. The majority of the countries in the world are now committed to taking measures for protecting intellectual property rights (IPR).

But when the government finally bulldozed all their objections to meet its international commitment, another tussle was started. Now it was the issue regarding who would control the newly-formed Intellectual Property Organisation of Pakistan (IPO). The issue was finally resolved by the prime minister and IPO was placed directly under the Cabinet Division. This means that IPO would be directly answerable to the prime minister himself.

Three parallel actions were taken by the government to meet its commitment to protect IPRs: establishment of the IPO as a policy making and regulating organisation; the Federal Investigation Agency (FIA) was given the authority to enforce the IPR laws and regulations; and customs authority was activated to check the inflow and outflow of counterfeit and pirated products. FIA has conducted many raids on major producers of pirated films, music and software CDs.

But in spite of some progress made regarding IPR to ease the international pressure, the IPO has lost its initial vigour. It took years to establish the special tribunals made in the country at the provincial level. The maximum punishments for the IPR violations are still not strict enough to discourage people from committing such crimes. These issues can be addressed by holding a regular meeting of the policy board of the IPO, which is not being practised at present.

All these efforts have brought some success. Pakistan’s name was struck out from the “Priority Watch List” of the US Commerce Department. Pakistan was on this list of 14 countries for a long time as one of the major sources of pirated and counterfeit products. We were not in that bad company as some of the other countries including Russia, China, India, and the Philippines. Now we have been moved to the ordinary watch list of a larger club of 45 countries.

The most important task ahead was to create awareness about why intellectual property rights should be protected. It is not only the general public that has to be informed and educated on this subject. I have come across a number of decision-makers in the government and judiciary who think that “intellectual property rights protection is the racket of MNCs to protect their fat profits.” And that, as a developing country, we cannot afford to indulge in what they call “an expensive moral luxury.”

There are three popular arguments against the protection of IPRs.

One well-meaning argument against the protection of copyrights of books and software is that we are a poor nation and to educate our children “we should beg, borrow and steal.” Similarly, this section of populist intelligentsia also says that we cannot afford expensive medicines and the patent rights should not be given to the pharmaceutical companies who develop these medicines. There are also many opinion makers who say that people make counterfeit items because big companies make expensive products and high profit.

Basically, all these well-wishers of people are confused by the whole issue of public welfare. The right of people to have education, the right of people to have access to knowledge and the right of people to have an inexpensive health care and less expensive consumer products cannot be undermined. But what they miss is that it is the duty of the state to provide education and healthcare to these people, not the private sector, writers, artists, and scientists who suffer at the hands of counterfeiters and copyright pirates. As a matter of fact, all governments love the confusion in which they can abdicate their fundamental obligation of looking after the social sector. And our intelligentsia is obliging.

Now let us examine each myth separately. Because of piracy of books and artworks, how many of our creative people can live off the income from the wonderful artworks produced by them? Why are our course books shoddy? Isn’t it because we do not pay our scholars decently and their books are pirated overnight.

As for the foreign course books, which are mostly used in higher education institutions, why can the government not buy their publishing rights and do an honourable job instead of indulging in piracy? In many cases, it is only the middleman and those who indulge in piracy who actually make the money, while the readers get low-quality books at marginally less price.

The issue of patented medicine is same. Much is said about the patent protection that it bars the local producers from the market and gives the companies with these rights to sell at high prices. The fact is that out of around 1000 basic drugs registered with the Ministry of Health, only five percent are protected by patents. So there is a vast field open for the local industry. Also, the patent rights do not last a lifetime but expire in seven to eight years. Many also argue that counterfeiting is encouraged because of big companies that sell their products at high prices. The fact is that nobody is stopping other entrepreneurs to introduce their own products and sell them at any price or even give them free to the people. But they should not have the right to take a piggy-back ride on other companies who make an investment in building brands. It is also an issue of cheating the consumer who buys the look-alikes as originals.

Critics are also of the view that IPR violations should not be kerbed or condemned because the MNCs and the US government are also asking for an effective implementation of these laws. On a practical side, can we afford to not listen to the west, which is our biggest trade partner? Trade kerbs by them can hurt the same poor people who produce exportable products. This criticism reminds me of the strange logic of Chairman Mao, which now even the Chinese have forgotten, “Oppose what the enemy supports and support what they oppose.”

The writer is freelance journalist and author. He can be reached at ayazbabar@gmail.com