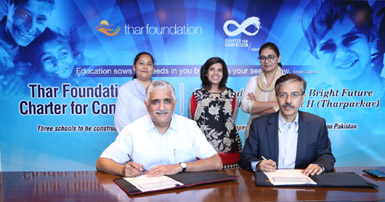 Karachi  –  After working to establish three schools in Mithi, Islamkot and Thar Block II, Thar Foundation on Wednesday reached another milestone by announcing that they would run three more schools to impart quality education in district of Tharparkar.
Thar Foundation, established by the Sindh Engro Coal Mining Company (SECMC), has signed a memorandum of understanding with Charter for Compassion Pakistan (CfCP) to run three primary schools in the area with low literacy rate.

As per the MoU, Thar Foundation will take overall responsibility of three primary schools in villages Bitra, Mansingh Bheel and Tharyo Haleepoto whereas, the CfCP will manage the day-to-day operations of the schools.

Each of the three schools constructed by Thar Foundation will be English medium having have nine rooms each, and facilities including safe drinking water, washrooms, playground with shaded area, boundary wall and solar panels for electricity supply in the classrooms.

Mr. Shamsuddin Shaikh, CEO of SECMC and Thar Foundation, and Mr. Amin Hashwani, CEO of CfCP signed the memorandum in presence of the teams from both the sides during a ceremony held here.
Speaking at the occasion, Mr. Shaikh said, “We are in Tharparkar not to just carry out the economic activity around the Thar Coal but also to bring about social uplift through intervening in health, education, and other sectors through Thar Foundation.

By engaging with organizations like CfCP, a professional organization in the education sector, Mr. Shaikh said they are ensuring deliverance of quality in respective fields.
Mr. Hashwani expressed his views as, “We all hear about the change that is coming to Thar, but it is also as important to know as to which kind of change and in which direction it is coming.”
He said, the more the economic activity is furthering in the area and more power plants are being established, the more jobs are created in such projects; however, he added, they also need to take into serious consideration the social development of the native communities.

Following intervening in areas like health, livelihood, and cultural preservation, Thar Foundation Thar Foundation is also working with The Citizen Foundation to impart quality education to 3000 plus children of Mithi, Islamkot and Thar Coal Block II.