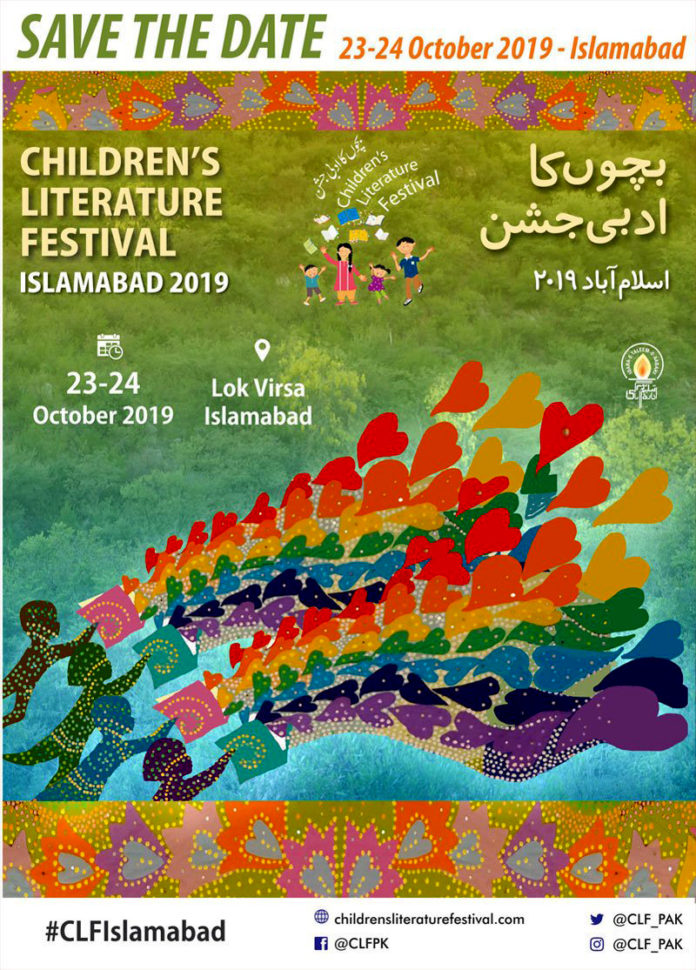 The event will be open to all from 9am to 4pm on both the days. At least 70 sessions have been planned for CLF Islamabad with over 105 resource persons and 30 partner institutions participating in the event. Our CLF Goodwill Ambassadors, including Ahsan Khan, Khaled Anam, Juggun Kazim, Sami Khan, Omair Rana, Nadia Jamil, Hasan Khan, Shamyl Khan, Ally Adnan, Syed Nusrat Ali, Atif Badar, singer Ali Hamza and others are actively contributing to the event. The CLF Islamabad 2019 poster has been designed by famous artist and author Fauzia Minallah who is one of the six advisors to the CLF.

Minister for Federal Education and Professional Training Shafqat Mahmood will inaugurate the two-day event on October 23. Special CLF awards 2019-20 would also be given to eminent resource persons and partners who have supported the movement since 2011 while a tribute would be given to poet and writer Fehmida Riaz at the inaugural ceremony.

Young authors, aged 8 to 18, will be launching their books at the CLF while a climate march to raise awareness about climate emergency will also be carried out by the students. Besides this there will be food stalls, book stalls, interactive stalls, science activities and board games to attract the children.  Day one of the festival will close with a concert by Khumariyaan, the band.

CLF is a social movement founded by Baela Raza Jamil of ITA and co-founded by Ameena Saiyid of Adab Festival in collaboration with a number of private and public organisations. The goal of CLF is to promote a culture of learning, which focuses on creativity, imagination and multi-sensory stimulation, and not just on school textbooks, tests and examinations. The CLF has a nationwide footprint, having completed 61 CLFs in all four provincial capitals, Islamabad and over 25 districts of the country, reaching over 1.4 million children and teachers since its inception in November, 2011.