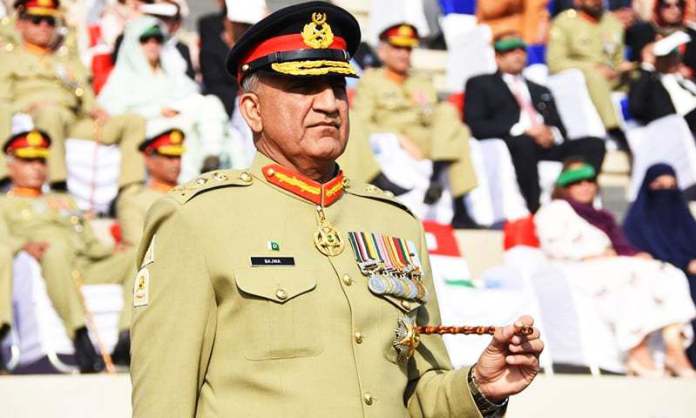 WEB DESK-General Qamar Javed Bajwa assumed command as the 16th Chief of Army Staff at an impressive change of command ceremony at General Headquarters on Tuesday- the ceremony largely attended by civil and military officials, cabinet members and par-liamentarians and retired military officials including the former services chiefs.
Outgoing Army Chief Raheel Sharif handed over the traditional Malacca Cane to General Qamar Javed Bajwa symbolizing the change of command.
Speaking on the occa-sion, General Raheel Sharif said his every decision was motivated by national interests and priorities.
He said he believed in stability and supremacy of institutions. It was his effort that all institutions work together for security and prosperity of the country. He thanked the entire nation, Federal and Provincial Governments, armed forces, Pakistan Rangers, Levies, security agencies, police and me-dia for fully backing and supporting the mission to defend and secure the motherland.
General Raheel Sharif said challenges of the country have not ended as the security situation of the region remains com-plicated. He said there was need to remember sacrifices of our martyrs to stabilize the successes of the recent years.
He said it is need of the hour for the nation and the institutions to work in harmony to wards off external threats. For this purpose, internal weak-nesses including criminality, extremism and corruption will have to be eradicated.
Raheel Sharif said im-plementation of the National Action Plan would continue till realization of the goal of complete peace.
Raheel said India’s ag-gressive posture is a serious threat to the regional peace and security. He warned that it would be dangerous to construe Pakistan’s policy of restraint as its weakness.
He said there can’t be durable peace and progress in South Asia without resolution of the Kashmir dispute. He said this requires special attention of the international community.
Referring to Pakistan’s sincere desire to see durable peace in neighbouring Afghanistan, General Raheel Sharif called for regional role and political reconciliation for resolution of the issue.
He said Pakistan Army fought successful war against terror giving a new hope for peace to people of Pakistan and the region. He said fruits of success are visible be it Balochistan, Karachi, op-eration Zarb-e-Azb or China-Pakistan Economic Corridor. He said CPEC would benefit not only Pakistan and China but countries of the entire re-gion. He said departure of the first trade caravan from Gwadar is testimony to the fact that this journey cannot stop now. He hoped that the enemies of the project would shun negative attitude towards CPEC and instead join in sharing its fruits.
General Raheel Sharif said the new Army Chief General Qamar Javed Bajwa is a competent and strong-willed professional.
In an informal chat with the media persons, the new Army Chief said, “the situation at the Line of Control will be alright.”
COAS General Bajwa called on the media for their support, asking them to play their part in keeping the morale of the troops. Gen Bajwa would be holding a meeting with representatives of the media soon.
The Army Chief added that he had a heavy re-sponsibility on his shoulder.