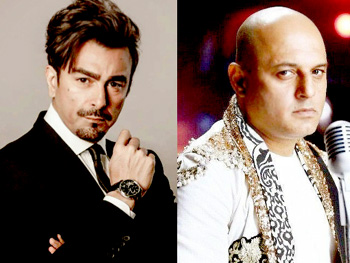 The two main stars of the entertainment industry, Shaan and Ali Azmat are to work together. If one has become synonymous with Pakistani cinema, the other led a rock and roll revolution that was not just restricted to Pakistan.

Both have been missing in action for quite some time now. Shaan hasn’t appeared on the big screen since Operation 021 while Azmat has been busy with his family hence didn’t get time for some new music.

A recent picture of the two stars sitting together in a studio has our attention.Where Shaan can be seen staring at what could possibly be a screen, Azmat with his headphones on also has his eyes fixed on it.

Well, hold on! It’s not a new song that Azmat has sung and Shaan has performed on. The picture was taken during Arth2’s dubbing session.

According to sources, Azmat will be making a cameo appearance in the film that also stars Humaima Malick and Mohib Mirza.

The story revolved around a wife’s struggle after discovering her husband’s extra-marital affair. The release date hasn’t been slated yet.

Azmat and Shaan had previously spread their magic in Waar.

Watching the stars together for the second time will definitely be a treat for all fans.

Cinemas to reopen across Pakistan from Today.