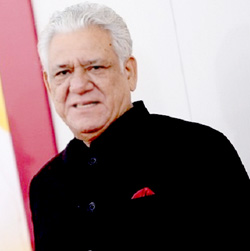 Born on October 18, 1950, the actor made his film debut in the 1976 filmGhashiram Kotwal. He was known for his performances in Indian, as well as Pakistani and Hollywood movies.

A versatile artist, Puri became a key player in India’s arthouse cinema scene in the 1980s and 1990s but achieved international fame for his roles in Hollywood films such as City of Joy, Wolf, and Charlie Wilson’s War.

Puri was also awarded an OBE (Order of the British Empire). He was given the Padma Shri in 1990 for his contribution to cinema. Among Puri’s well known films were Aakrosh (1980), Ardh Satya (1982) for which he won the National Award for Best Actor, and British film East is East (1999).

Puri made a name for himself in the 1980s with the alternative art cinema that found a niche audience in India, playing several memorable characters that depicted the anger and angst of those times.

He also worked in a number of Hollywood and British films, including “The Reluctant Fundamentalist“, “East is East“, and most recently in “The Hundred-Foot Journey“.

Om Puri continued to face trouble ever since he voiced his opinion to support Pakistani actors and urged for the sanity to prevail.

He also spoke negatively about the Indian soldiers on the national television. However, he apologised for his disparaging remarks.

In October last year, a police complaint was filed against the veteran actor for his comments that were found to be insulting to Indian soldiers by a section of the film industry. Complainant Prithvi Maske said, “Referring to the Indian Army and soldiers, he [Om Puri] said that we had not given the invitation to the soldiers of the Indian Army. They joined the army at their will.” During a debate on a TV channel, Puri had said: “Did we force them to join the army? My father was also in the army… We are proud of them (soldiers)… I am asking you: Do you want India and Pakistan to become Israel and Palestine?