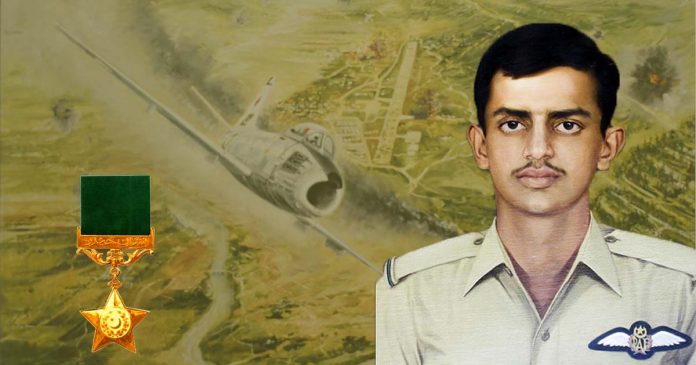 “In line of duty, Pilot officer Rashid Minhas lived up to great traditions of Pakistan Air Force defending the motherland.”

The brave son of Pakistan was born on 17 February 1951 in Karachi. He belonged to the famous Minhas clan of Rajputs. Minhas spent his early childhood in Lahore. Later, the family shifted to Rawalpindi.

His childhood fascination with aircraft and aviation led him to what he truly was destined for. Minhas embraced his true passion after school and earned a degree in military history and aviation history from the University of Karachi. He was commissioned as a pilot in the Pakistan Air Force in 1971.

Minhas was taxing toward the runway when a Bengali instructor pilot, Flight Lieutenant Mati-ur- Rahman, signalled him to stop and then climbed into the instructor’s seat. The jet took off and turned toward India.

Minhas radioed PAF Base Masroor with the message that he was being hijacked. The air controller requested that he resend his message, and he confirmed the hijacking. Later investigation showed that Rahman intended to defect to India to join his compatriots in the Bangladesh Liberation War, along with the jet trainer.

However, Minhas did the only thing within his control and forced that plane to crash just 32 miles from the Indian border, deliberately sacrificing his life for the honour of Pakistan.

Awarded with Pakistan’s top military honor Nishan-E- Haider, Minhas became the youngest man in history and the only member of the Pakistan Air Force to be honored with this award for his valiant feat. Titled a national hero the Pakistan Air Force base at Kamra was renamed PAF Base, Minhas, often called Minhas-Kamra.