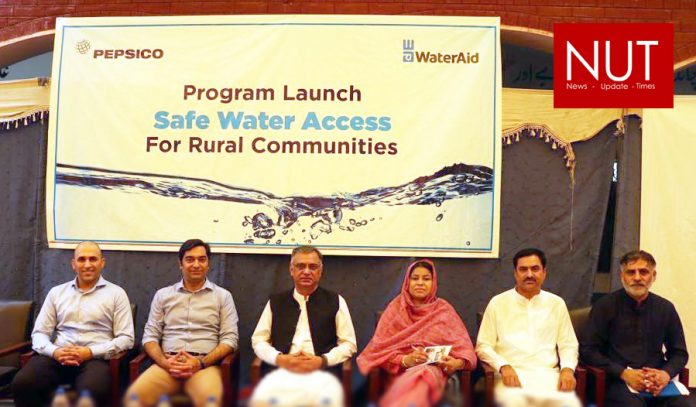 Okara (Nut Desk)  PepsiCo Foundation has extended its partnership with WaterAid to enable its ‘access to safe water’ program for rural communities. The partnership was announced during a program launch ceremony held at the Government Girls Elementary School Mirzapur in the Depalpur Tehsil of District Okara. The announcement was made by PepsiCo Senior Director Commercial and Corporate Affairs Mr. Mohammad Khosa in the presence of the WaterAid team, local government officials and members of the local community.

The program will enable safe water access for more than 24000 people (including 2400 school children), through the construction of 7 community managed water filtration schemes. In addition to the water filtration plants, hygienic toilets and hand washing amenities will be developed in four schools. Community members will be trained on WASH (Water, Sanitation and Hygiene) related behaviors and practices.

Senior Director Commercial and Corporate Affairs, PepsiCo Pakistan, Mr. Mohammad Khosa, commented, “We strongly believe in creating smiles for everyone; especially for the communities we work with. The rural extension of our safe water program will focus on provision of safe water to underserved communities in the potato growing belt of Pakistan so that potato growers, field workers and the entire communities that they are a part of can benefit from this facility. I thank the PepsiCo Foundation and WaterAid for their partnership on this program”

Through partnerships funded by The PepsiCo Foundation, the company’s philanthropic arm, PepsiCo since 2006 has helped more than 55 million people gain access to safe water through distribution, purification, and conservation programs, far surpassing the company’s original target to help 25 million people by 2025. In Pakistan, PepsiCo has enabled safe water for over 200,000 people in the urban underserved areas of Karachi, Islamabad and Lahore.

PepsiCo Pakistan’s safe water program is part of its PepsiCo Positive mission which is focused on charting a new course to drive positive action for the planet and people. Under the PepsiCo Positive agenda, PepsiCo strives to create growth and shared value with sustainability and human capital at the center.

WaterAid Country Director Arif Jabbar Khan said that “Through our long-standing partnership with PepsiCo, we are bringing positive changes in the lives of millions of people. The rural extension program in Pakistan opens our support for several communities in need” Mr. Khan also said that WaterAid has that WaterAid designs programs that are comprehensive, sustainable and localized to community needs.