Karachi (Muhammad Yasir) Overseas Investors Chamber of Commerce and Industry (OICCI) has said that despite the lackluster economic activity during the past one year, the OICCI members have re-invested over US$ 2.7 Billion in Pakistan during this period, which is highest ever on a comparative basis over the last few years.

The investment by OICCI members was almost at par with the total FDI of $2.8 in the country during the same period. In the past six years, OICCI members have re-invested US$ 10.4 Billion, whereas FDI inflow in the country was only US$ 11 Billion FDI, which reflects the extreme confidence of the leading foreign investors, who are already operating here, on opportunities in Pakistan.”

These views were expressed by President of the Overseas Investors Chamber of Commerce and Industry (OICCI) Mr. Irfan Wahab Khan and Secretary General M Abdul Aleem during an interactive session with leading media representatives in Karachi where they gave an overview of OICCI’s role in promoting Foreign Direct Investment (FDI) and shared the Chamber’s views on recent economic developments affecting FDI and the overall business environment.

The OICCI President whilst candidly expressing his dismay on the continuing poor FDI inflow into the country observed that “the OICCI members continue to remain upbeat, based on their experience of operating in the country, and they have full confidence in the economic potential of Pakistan.

Giving a balanced assessment of the business environment, the OICCI team presented key highlights of its bi-annual Business Confidence survey – wave 16, released in May this year, which had indicated a downward trend with an overall Business Confidence score (BCS) of 14%.  However, the BCS of OICCI members only, was significantly more bullish at 38%, reinforcing a clear message about the positive sentiments of foreign investors.

The OICCI 2017 Perception Survey of foreign investors – which covers OICCI members only – also reflected positive sentiments, as over 70% members had indicated plans to make additional investments in the country and strongly recommend Pakistan to potential new foreign investors.

The OICCI President however cautioned that “this support for economic growth and investment from OICCI members should not be taken for granted, as sentiments are dependent upon the expectations that the government will soon unveil growth-oriented economic and trade strategies, especially some practical out-of-box new policy initiatives to boost exports, bridge the gap in the Balance of Trade and Balance of Payments and to attract sizeable FDI and local investment, all of which are critical to revitalize the economy and put the country back on a fast track of economic growth.

Taking into account the demographics of the country, Pakistan has the potential to absorb FDI of at least 3 percent of the GDP, as compared to less than one percent of GDP received in the past six years.”

“What is expected”, Irfan added, “is an improved governance structure, solid progress on improving Pakistan’s positioning on World Bank’s “Ease of Doing Business” parameters, supported by strong economic performance through substantially higher tax collections, effective use of technology to broaden the tax base, strict enforcement, accountability and capacity building in the key government functionaries. There is a great opportunity for significant productivity gains through research and digitalization in agriculture, energy and water resource management”.

The OICCI President further elaborated that “equally important for the country is to share its success stories, like that of the OICCI members, to attract new investment and boost confidence and a culture of success especially among the youth of Pakistan. OICCI on its part is regularly promoting the potential of Pakistan and the success stories of foreign investors in Pakistan to visiting foreign business delegations, senior diplomats and the media, even at international forums”.

Speaking of the investment potential in Pakistan, Secretary General OICCI, M. Abdul Aleem informed that “Pakistan with over 200 million population and a strong middle class of 70 million, is a highly attractive market opportunity for investors. As an example, many international agencies have already assessed Pakistan’s retail sector as one of the fastest-growing markets in the world and worth approximately US$ 150 billion”. 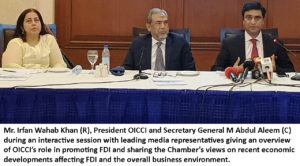 Aleem added that “Despite negative news which circulates without verification and due diligence, it is no surprise that Pakistan is on the radar of most of the potential foreign investors who value the growth opportunity in the longer term”. Quoting from HSBC’s recent report, Aleem mentioned that Pakistan is poised to be among the top six fastest-growing global economies by 2030, confirming a similar assessment by other reputable international agencies.

OICCI leadership greatly emphasized the need of focus on economic priorities, political stability, a more mature and balanced media, ability to timely leverage the positive story on Pakistan internationally like turnaround on security and law and order, besides raising the standing of Pakistan in all international measures like Competitiveness survey, Ease of doing business survey, etc.

OICCI is the collective voice of top 200 foreign investors in Pakistan, who have an asset base of over $ 90 Billion and contribute roughly one-third of the tax collection in the country.  The OICCI members include 50 subsidiaries of Fortune 500 companies and 55 of its members are listed on the PSX.