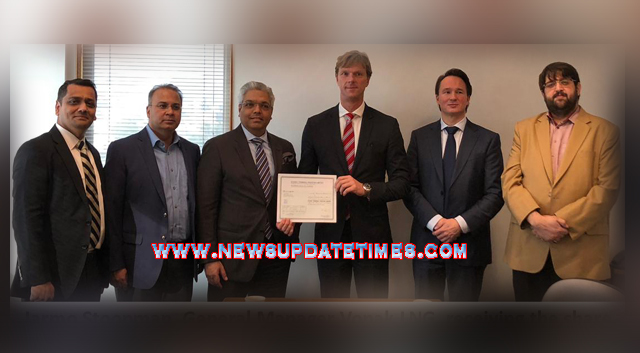 Lahore (Muhammad Yasir)  Engro Corporation announced the closing of the deal signed earlier this year with Vopak in relation to the Dutch company’s acquisition of a 29% share in Elengy Terminal Pakistan Ltd. (ETPL). Engro Corporation has sold 24% and IFC has sold 5% shares in ETPL to Vopak LNG Holding B.V., leaving Vopak with a 29% shareholding in ETPL. The total foreign direct investment from this deal is expected to be around $31.4 million dollars.

This is the culmination of over a year-long due diligence exercise by Vopak that delved into the operational, financial and regulatory aspects of this transaction. It also takes Foreign Direct Investment generated by Engro to USD 550 mn in total over the last three years. This inflow of dollars places Engro among the top 15 exporters of Pakistan in terms of foreign exchange receipts on an annualized basis during this period. 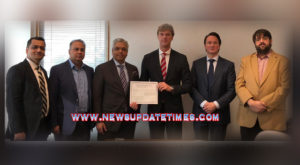 ETPL’s wholly owned subsidiary, Engro Elengy Terminal (Pvt.) Ltd. (EETPL) owns an LNG facility which is located in Port Qasim, adjacent to the Engro Vopak chemical terminal on the mainland side of the channel into Port Qasim. The facility has been in operation since 2015 and is the first LNG import facility in Pakistan. It has regasified 590 billion cubic feet of gas since inception and has met all of its contractual commitments and obligations to date.

The liquified gas is supplied, under long-term contracts, via LNG carriers from various exporting countries to the FSRU, which is moored to the EETPL jetty and connected to its pipeline. The regasification takes place on board the FSRU and the gas is transferred to the mainland where, under high pressure, it enters SSGC’s grid.

Pakistan is a market with more than 200 million people and has a growing energy demand in which the share of gas is expected to increase. Gas is mainly used for power supply for the growing population, industrial usage and as feedstock for fertilizers.

Vopak and IFC have separately agreed that the remainder of IFC’s shares will be acquired by Vopak pending certain regulatory consents and approvals. After completion of this transaction, the shareholders in ETPL will be Engro Corporation (56%) and Royal Vopak (44%).

“Our relationship with industry leader Royal Vopak is over two decades strong, and today’s announcement is another step towards further strengthening that relationship. We’re excited to enter into this mutually beneficial partnership with Royal Vopak which will allow Vopak to realise their strategy of entering the Pakistan energy market and will pave the way for Engro and Vopak to collaborate in further ventures at home and abroad using their combined resources and expertise,” said Ghias Khan, President and CEO of Engro Corporation. “Engro has always endeavoured to bring the best of the world to Pakistan because we recognize that developing markets require FDI in infrastructure and projects to remain on a path of progress.”

Eelco Hoekstra, Chairman of the Executive Board and CEO of Royal Vopak, said “We very much look forward to further build, inside and outside of Pakistan, on our excellent partnership with Engro. This new step in our cooperation gives Vopak an excellent entry in the growing Pakistan LNG market. This fits very well our ambitions to grow and diversify our service offering in LNG.” 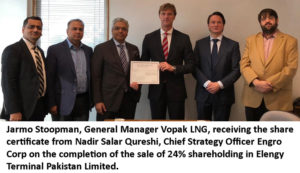 Engro’s business relationship with Royal Vopak dates back to 1997, when the then-named Engro Chemicals Pakistan Limited entered into the chemical storage and handling business in a joint venture with a predecessor of Royal Vopak. In November 2017, a Memorandum of Understanding was signed between Engro Corporation and Royal Vopak to explore potential growth opportunities, within Pakistan and abroad, in industries including LNG, chemical storage, and terminal operations.