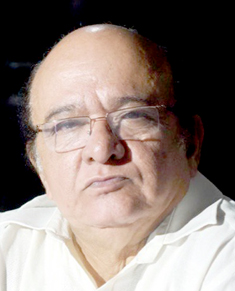 Zulfikar Ali Bhutto lives on in history, 38 years after his hanging at the hands of a most ruthless military dictator in what is now universally considered a ‘judicial murder’.

History has absolved Bhutto. But it is yet to erase the blot of an immense moral burden on the conscience of the judiciary. Times have changed and the undying Bhutto’s legacy gradually fades without being rejuvenated by a dynastic third-generation Bhutto Bilawal Zardari.

You can revisit Bhutto’s memory by commemorating his martyrdom and ritually visiting his mausoleum, but you can’t meet the challenges of your times by just parroting praises for the great man. It is no longer a Bhutto and anti-Bhutto divide, even though social stratification widens between the deprived and the privileged. But the PPP under a mimicking Bilawal or Machiavellian patriarch, Asif Zardari, is just struggling to keep its head above the political waters. No doubt, Zardari played a crucial role in the transition-to-democracy period and helped transfer power from the presidency to parliament by showing the door to Gen Musharraf, and with the passage of 18th Amendment. Zardari succeeded in surviving in power, but at the cost of the PPP’s popular image; this brought a once most popular party to its knees in the last general elections.

It was the dynamic and heroic Benazir Bhutto who held high the social-democratic flag in post-cold war times, somewhat in the footsteps of the New Labour of Great Britain. She bravely picked up the fight against the reactionary dictatorship of Gen Ziaul Haq. Where Bhutto gave us the 1973 constitution, Benazir Bhutto (BB) wrote yet another glorious chapter in the long struggle for democracy and constitutional rule against successive military dictatorships. Unlike Asif Zardari and her son, BB earned the mantle of leadership in her own right while standing up to unimaginable hardships. Whatever you say about her political manoeuvres or the NRO, she again paved the way for democracy and gave the PPP a new ideological cause by firmly standing up to the threat of violent religious extremism.

On his 38th death anniversary, Z A Bhutto was less enthusiastically remembered by his depleting worshipers as they now have less hope in the current leadership, which is struggling with its bad image over almost nine years of bad governance in Sindh. The PPP was once famous for its critical popular political culture. That, it seems, has now been buried under the arrogant denial of malpractices of some of its leaders. Rather, the party shows no sign of repentance over the alleged corruption of some of its blatantly corrupt leaders.

Instead of sidelining those who brought a bad name to the unblemished record of the founders, the party firmly stands behind them. It looks ridiculous when Bilawal – a decent and thoughtful young man – attacks the Sharifs on corruption charges while standing with his party’s former prime ministers known for their poor record and some kleptomaniacs.

Bhutto – himself a clean, distinguished intellectual, visionary and strong administrator – gave us the most talented and clean cabinet in Pakistan’s history. He was a populist and a patriotic and strong leader who, in fact put together a broken and dismembered Pakistan and gave the downtrodden of this land the consciousness and strength to stand up to tyranny and exploitation. He believed in the people and undertook reforms to alleviate the plight of the poor and also made Pakistan’s defence impregnable. Ironically, his national security paradigm holds the ground till today, even though it helped build a national security state that flourishes on the marginalisation of civil society.

Though Bhutto’s land reforms failed to make the peasantry owners of the piece of land they cultivate, he did raise consciousness among the rural poor on their rights. He built a huge public sector under his state-socialist model, but at the cost of not only big business but also small businesses. Bhutto’s greatest mistake was the compromise that he expeditiously made with the religious right. That, however, could not save him from the wrath of what is known as the mullah-military-bazaar alliance. Bhutto’s achievements and endeavours far outweigh his weaknesses and mistakes – of which there were many.

Bhutto’s popular politics and struggle were too short and less troubling compared to that of his worthy successor. BB had to fight against two dictatorships and the strong political and ideological legacies of Gen Ziaul Haq. She learned from the authoritarian mistakes of her father and reinvented the PPP in her own humanist image to suit her own times, without forgetting to address the PPP’s strong constituency among the poor and the social-liberal intelligentsia.

Like her brave father, BB took on the forces of religious extremism and terrorism and provided an alternative narrative to make Pakistan a truly democratic and enlightened country which is at peace with its neighbours. It was too tragic to see her die at the hands of forces of extremism and authoritarianism. BB was far more democratic, humanistic and visionary than any other politician in Pakistan. She was the last leader of a generation that remained committed to social idealism and liberal-democratic values in a country where violent extremist and conservative paradigms prevail.

Though the PPP remains committed to human, civil and political rights, it has lost touch with its pro-people ethos and popular aspirations of the masses. Under Zardari, the PPP is now a party of the feudal elite – entirely dedicated to power politics, regardless of peoples’ expectations. The emergence of young Bilawal on the political scene is clouded by the over-arching shadows of his father. Bilawal doesn’t know how to chart his own path different from that of his father’s. No doubt, he needs his father as much as BB needed her mother to make her way forward. And Bilawal’s on-and-off ‘launches’ have damaged his prospects to rebuild the PPP from the ashes of past glory.

As a student of politics, Bilawal should be able to discern the difference between the times and pursuits of his grandfather and mother and find his own grounds. BB gave the PPP a lot that was different from her father. That is what Bilawal needs to do as well if he is really serious about his political career and the future of a PPP that is receding from the national scene. You can’t be a vanguard of a popular social-liberal party on the ‘strength’ of feudal landlords in the backyard of Sindh.

In its special supplement on Bhutto, the PPP did not bother to say a word about what it intends to do. The party’s intellectual bankruptcy is quite obvious as is the alarming loss of touch with the masses and their needs. There is a large space for a popular social-democratic centre-left party in the present circumstances. And Bilawal, despite his progressive inclination, is not finding enough room in his party to come forward and fill the void that the PPP has itself created.

Under the burden of bad governance, the young PPP chairperson cannot move forward with his muddle-headedness. The PPP has to decide which side of the social and ideological divide it stands on if it has to survive as a party of the people.

The writer is a senior journalist. Email: imtiaz.safma@gmail.com

Whom not to choose – Imtiaz Alam