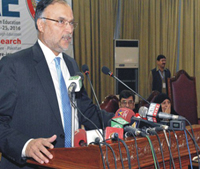 Lahore—Federal Minister for Planning and Development Prof Ahsan Iqbal has said that the challenge of the present age is that whatever we are teaching and whatever research work we are doing should be according to our needs.
He was addressing the concluding ceremony of 4th International Conference on Research in Education at Faisal Auditorium here on Friday.
PU Vice Chancellor Prof Dr Mujahid Kamran, Vice Chancellor University of Education Prof Dr Rauf-e-Azam, Dean Faculty of Education Prof Dr Mumtaz Akhtar, Conference Secretary Prof Dr Abid Hussain Chaudhry, Prof Dr Rifaqat Ali, Prof Dr Rizwan Akram, Dr Abdul Qayyum Chaudhry, delegates from various parts of country and the world and a large number of students were present on the occasion. Addressing the ceremony, Federal Minister Ahsan Iqbal said that we were passing through the era of knowledge revolution and if we did not change ourselves with the changing time, we would meet our end. He said that we must explore new horizons of knowledge and must see how we could utilize knowledge according to our needs. He said that our youth must believe in their abilities and Pakistan because our country was progressing rabidly. He said that our universities must find out solutions to the problems being faced by all sections of our society. The federal minister said that cut and paste knowledge was responsible for our destruction. He said that we were deciding 6 new standards for evaluating universities i.e standard of education, standard of research, academia-industry linkages, university’s contribution towards community, relationship between learning and technology and how socially responsible the university product was and creation of entrepreneurship opportunities. He said that 11 thousand megawatt electricity would be added to the system in the next two years. Talking to media, Mr Ahsan Iqbal said that General Raheel Sharif would be remembered as one of the greatest commanders of army in the history. To another question, he said that the difference between General Musharraf and General Raheel Sharif was that the former violated Constitution and now facing downfall while the later upheld law and reached new heights.
Addressing the ceremony, Dr Mujahid Kamran said that Ahsan Iqbal had always supported research projects in Planning Commission and had played key role in providing funds for various projects at PU. He said that in 2014, the Planning Commission provided Rs840 million grant for various projects at PU, out which some had been completed and some were near completion. He said that in 2016, the commission had sanctioned Rs 980 million grant for establishing energy centre at PU due to support of the federal minister. He said that Mr Ahsan Iqbal was a hardworking minister and always supported research activities. Addressing the ceremony, Prof Dr Mumtaz Akhtar demanded of the government to allocate 4 percent of GDP to education and 3 percent to research and development. Later, souvenirs were presented to the guests of honor and foreign delegates.