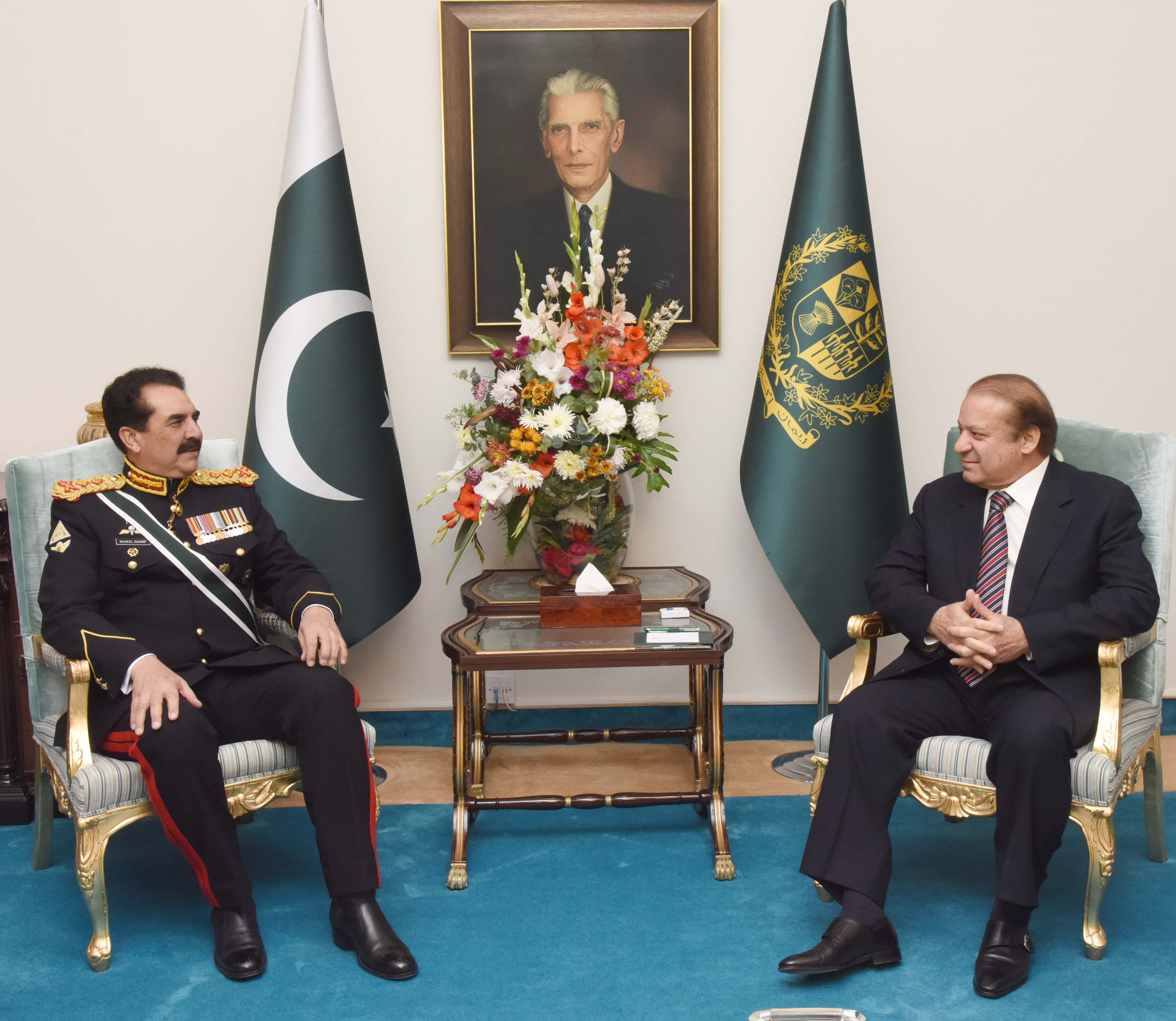 Lauding the dedicated, meritorious and exemplary services of General Raheel Sharif for the country and its armed forces, Prime Minister Nawaz Sharif Thursday said he proved beyond a shadow of doubt that he was one of the finest military leaders of his generation.

“General Raheel belongs to a family which is second to none when it comes to gallantry and heroism. They have a tradition of serving the nation and laying down their lives in the line of duty,” he added.

“The shahadat and award of Nishan-e-Haider to Major Aziz Bhatti Shaheed and Major Shabbir Shareef Shaheed is itself a unique honour of his family,” the premier said while speaking at a farewell dinner hosted in the honor of General Raheel Sharif at the Prime Minister’s House.

Members of the federal cabinet, services chiefs and senior civil and military officers were present at the dinner.

“General Raheel Sharif’s journey from a young, devoted and brilliant cadet officer to the chief of army staff is marked by all the hallmarks of professional distinction and excellence,” the prime minister said.

“This sense of duty and unconditional dedication and commitment to our motherland had also been evident in the person and career of Gen Raheel ever since he joined the 54th long course in Pakistan Military Academy,” he added.

The prime minister said as an Adjutant and later Commandant of Pakistan Military Academy and GOC of the 11th Infantry Division, General Raheel Sharif stood out in the discharge of his responsibilities.

“His services as Corps Commander Gujranwala and Inspector General for Training and Evaluation in the Pakistan Army prepared him well for responsibilities as the chief of army staff,” he added.

Nawaz said three years earlier in this month, General Raheel Sharif was appointed to this position for his outstanding military abilities, leadership qualities and integrity.

“It is as chief of army staff that General Raheel made the most difference in the service of our country. He proved beyond a shadow of doubt that he is one of the finest military leaders of his generation,” he added.

The prime minister said it was under Gen Raheel’s leadership that Pakistan’s armed forces confronted not only external threats but also the menace of terrorism.

“We successfully established the writ of the state and reclaimed every inch of territory under our sovereign control,” he added.

The premier said Pakistan’s armed forces could surely take pride in the flawless execution of the operation Zarb-e-Azb which was recognised as the most comprehensive, robust and successful anti-terrorism operation anywhere in the world.

“It has made the entire world aware of our unflinching resolve and commitment to root out terrorism as we accomplished what countries with far more resources have not been able to achieve in much longer periods,” he added.

The premier acknowledged with great appreciation that General Raheel Sharif always led from the front. “We worked together in addressing a number of security challenges and I am glad to say that Pakistan today is much safer and stronger than 2013,” he added.

“May Allah bless you and your family with lasting happiness and prosperity as we wish you success in all your future endeavors,” concluded the premier.