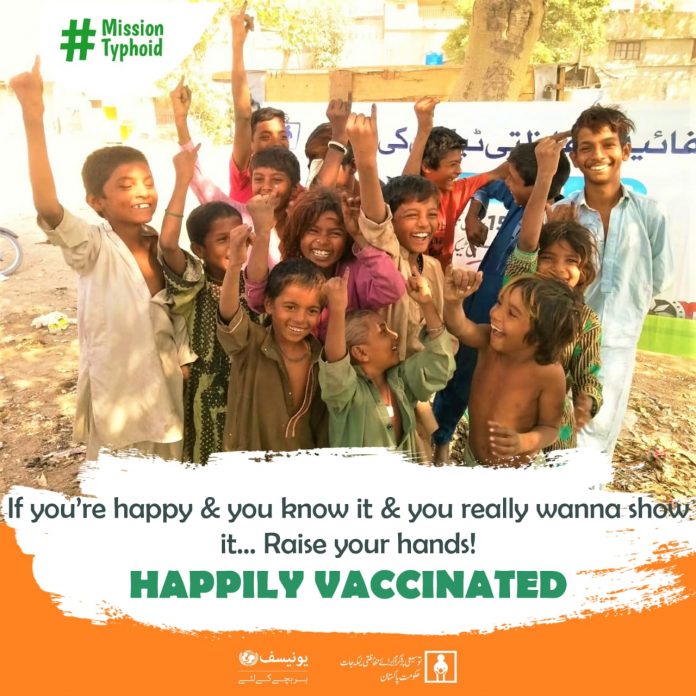 Lahore (Muhammad Yasir) Pakistan has reached another milestone by starting the second phase of vaccination against Typhoid in Punjab and the Islamabad Capital Territory (ICT)/Capital Development Authority areas, from today. The campaign starts in 12 districts of Punjab and ICT as part of reaching an overall target of 12.7 million children between the ages of nine months to 15 years.

In November 2019, Pakistan became the first country in the world to introduce Typhoid Conjugate Vaccine (TCV) into its routine immunization program to protect children against the highly infectious disease. The first campaign was launched and successfully conducted in all districts of Sindh province reaching approximately 10 million children.

“Every child has the right to live a healthy life and therefore Pakistan has prioritized strengthening its immunization program”, says Dr. Faisal Sultan, Special Assistant to the Prime Minister on Health. “It is high time that we protect our children from typhoid and other contagious diseases to give them a healthy start in life and a secure future. The present government is proactive to protect children against this fatal disease through a phased strategy”, he added.

The TCV drive has been started due to the high number of typhoid cases in the country. More than 8000 cases were reported in the year 2020. The impact of Typhoid, especially on children under the age of 15 years, is having a negative impact on the overall health status of the population. The disease is most commonly caused by contaminated drinking water, poor sanitation infrastructure, and lack of food safety preventive measures.

“Typhoid can be prevented through an aggressive vaccination drive in areas where high number of infections are recorded,” says Dr Rana Safdar, Director General of Health.” The Government of Pakistan has launched this vaccination campaign aiming to immunize maximum number of children in Punjab and the ICT. We urge parents to fully cooperate with health workers and vaccinators who are carrying out this door-to-door campaign.”

The Government of Pakistan has engaged 6,975 skilled and trained vaccinators and 6,975 assistants to effectively and safely immunize children during this campaign. Along with this, a total of 13,950 social mobilizers have also been trained to visit households mobilizing parents and caregivers to visit the vaccination sites with their children.

“Typhoid, especially the extensively drug-resistant variant is a serious disease. Vaccination is one of the most effective public health interventions. We highly appreciate the support being received from the Punjab Government and ICT/CDA authorities for this campaign which aims to vaccinate large number of children in the shortest possible time,” says Dr. Palitha Mahipala, World Health Organisation Representative in Pakistan.

The number of Typhoid cases registered in the country and the emergence of extensively drug-resistant Typhoid is an alarming situation. It can however be controlled through TCV which is a one-dose vaccine, injected intramuscularly, at a lower cost, has higher efficacy, and is expected to provide long lasting immunity in adults, children, and infants older than nine months of age.

“TCV has tremendous potential to prevent transmission of typhoid and limit the spread of drug-resistant typhoid strains with only one dose,” says Aida Girma, UNICEF Representative in Pakistan. “This vaccine is safe and has low rates of general side-effects. Children who are most at risk are being prioritized in this phase of the TCV campaign. UNICEF remains committed to continue its support to the Expanded Programme on Immunization in Pakistan, through technical assistance, risk communication and community engagement and procurement of vaccines, in collaboration with WHO and other partners.  We will not rest until each and every child is protected against vaccine-preventable diseases,” she added.

Pakistanis may travel to Saudi Arabia after AstraZeneca jab