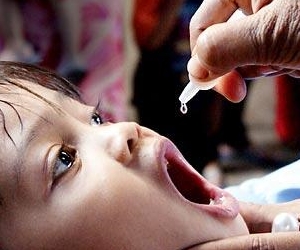 Geneva (Web Desk) –  Faced with a shortage of polio vaccine, the World Health Organization urged countries Friday to resort to smaller, fractional doses to ward off outbreaks of the crippling disease.

“We do have a problem with the vaccine in the sense of not having enough of it,” Alejandro Cravioto, head of WHO´s Strategic Advisory Group of Experts (SAGE), told reporters in a telephone conference.

“But the recent evidence that we reviewed shows that even if we give a smaller dose of vaccine under the skin instead of inside the muscle, we can have the same impact of protection as before,” he said.

SAGE, which advises the UN health agency on immunisation policies, called for two smaller doses of the vaccine to be injected under the skin at six and 14 weeks after birth, instead of a single, larger intermuscular dose.

But there have been “problems” in the production, Duclos said, adding that the stocks of the vaccine should be fully replenished by the end of 2018.

Cases of polio have decreased by 99 percent since 1988, when polio was endemic in 125 countries and 350,000 cases were recorded worldwide.

The wild version of the virus now exists only in Afghanistan and Pakistan, where eight cases have been registered over the past six months.

There are still rare cases of vaccine-derived polio infections, caused by another type of polio vaccine, which contains small amounts of weakened but live polio virus.

Oral polio vaccine (OPV) replicates in the gut and can be passed to others through faecal-contaminated water — meaning it won´t hurt the child who has been vaccinated, but could infect their neighbours.

Long-term, WHO recommends that the OPV should be phased out worldwide and replaced completely by IPV.

The WHO experts on Friday hailed progress towards eliminating wild polio transmission.

But they warned that even after the disease has been eradicated it will be necessary to continue mass-immunisation with the IPV vaccine to avoid a resurgence of the virus.