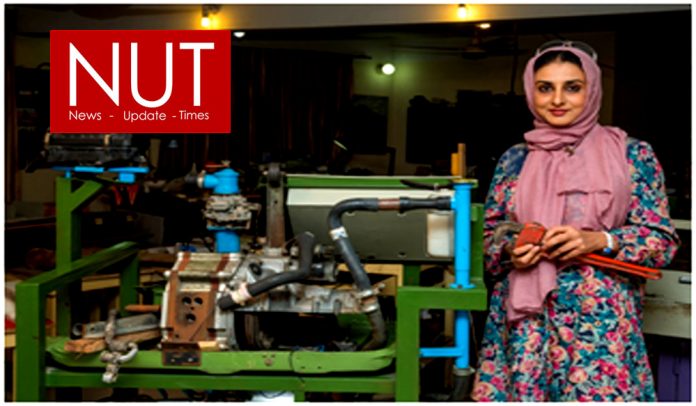 Lahore (Muhammad Yasir) The soft-spoken Dr. Sarah Qureshi is a qualified engineer with a keen interest in aviation engines, and a Ph.D in Aerospace Propulsion. Sarah’s father, Masood Qureshi, is an inventor and scientist with decades of experience while her mother, Dr. Rumina Qureshi, is a Chemistry Professor. Sarah recalls that the family “had very scientific discussions at the dinner table…my parents shared their interests with us,” says Sarah, “And now my six-year-old daughter accompanies me when I’m travelling or deliveringlectures, there’s a lot of invisible learning going on.”

Sarah decided to become a mechanical engineer and was the only woman in her class at the National University of Science and Technology, Rawalpindi. “It was not easy,” she says, “But my family and teachers were supportive and that gave me the confidence I needed to go on.” After graduating, Sarah worked in the automotive and engineering industries. She wona scholarship to study for her Masters at Cranfield University, a hub of aerospace research in the United Kingdom. After returning to Pakistan in January 2009, Sarah got married a couple of months later, in March. She went back to Cranfield University to study for a Ph.D. in 2010.

Sarah’s daughter was born during her M.Phil studies and she was granted permission to do her research work back home in Pakistan. Her research question focused on the subject of aircraft contrails and their environmental .impact.

Aircraft engines produce water through combustion, and the liquid is released through the plane’s exhaust. The water freezes in the cold atmosphere at high altitudes, forming clouds, known as contrails that trail behind the aircraft. These artificial cirrus clouds reflect sunlight back to space and contribute to the greenhouse effect. Scientists estimatethey have five times the potential of carbon dioxide to create global warming.

At the time, most ongoing research in the field focused on contrail mitigation or avoidance. Sarah followed another line of enquiry, working on the research question with her father. Masood Qureshi invented a device that would eliminate contrails at source. The device condenses water vapour into liquid that can be carried on board the aircraft, to be discharged later.  The aim is contrail capture, rather than suppression. “This work is ahead of its time,”says Sarah. ‘We have a revolutionary idea that could change the way the aviation industry works.”

One advantage of the device is that it does not require modification of the airframe and can simply be added on as an attachment to any jet engine. In an age of water scarcity, it can help to mitigate shortages, as the liquid on board can be discharged as artificial rainfall.

Dr. Sarah Qureshi developed a complete engineering model for the device as part of her Ph.D thesis. After completing her Ph.D, she set up Aero Engine Craft to launch the device on a commercial scale.

She realized the project needed financial support and the development of a business modelin order to move ahead. Sarah’s husband, Asim Naseer, is a LUMS MBA graduate and thought it would be a good idea for her to train at the National Incubation Centre at LUMS,for the commercial aspect of the project. Sarah recalls coming across a Karandaaz announcement about training opportunities for women entrepreneurs at LUMS. She applied for and won a place in the Karandaaz supported programme at NIC. “Coming from an engineering background,” she says, “There were a lot of business elements I had to learn and the programme provided that environment and some formal training.”

Karandaaz promotes access to finance for small businesses, to help generate broad based employment in Pakistan. Improving economic participation of women is addressed as a priority area for the organization and its sponsors, the United Kingdom’s Foreign, Commonwealth and Development Office (FCDO) and the Bill and Melinda Gates Foundation. The Karandaaz Women Entrepreneurship Challenge (WEC), launched in 2017, now running as Karandaaz’s women entrepreneurship support initiative, titled, Women Ventures, aims to support women-led businesses by providing business development support as well as risk capital so the enterprises can grow. In the first WEC round, Karandaaz partnered with three business incubators for the capacity building of women entrepreneurs. They are LUMS in Lahore, the Balochistan University of Information Technology, Engineering and Management Sciences (BUITEM) in Quetta and Invest2Innovate (i2i). Businesses that successfully graduated from the incubation programs became eligible to receive funding from Karandaaz.

“We aim to create business value for the market players,” says Dr. Sarah. “A lot of work has been done on emission trading and carbon trading by the aviation industry. They could have a similar model for contrail trading.” She is confident that the industry will be inclined to adopt a device that is easy to manufacture and does not require it to change all its parameters.

Aero Engine Craft has now well on its way from strength to strength and has been recognized as a viable avenue by both the scientific community as well as investors. The father-daughter duo are now hopeful to partner with global engine manufacturers to test the device on commercial aircraft engines. Businesses are now focused on clean technologies and there is huge potential for sales, considering the number of aircraft in the skies.

“Whatever contribution we can make to save our planet for ourselves, and our future generations is important, we must go ahead with it,” says Dr. Sarah Qureshi as she moves ahead with her mission. 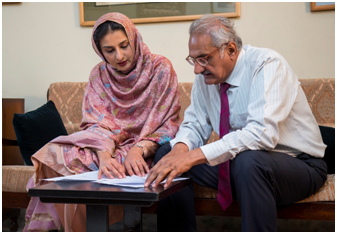 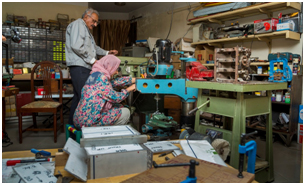