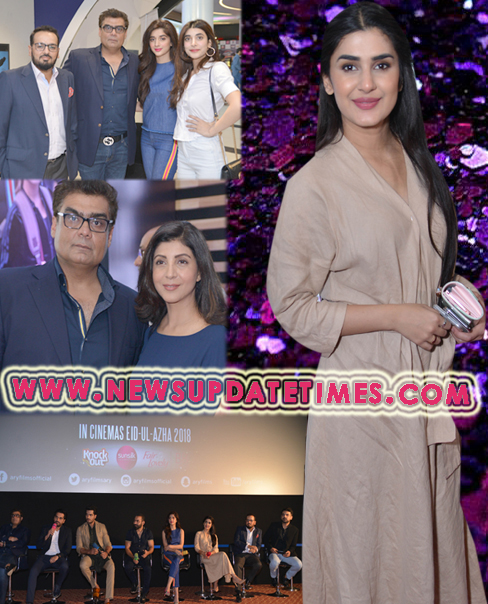 Lahore (Muhammad Yasir) The blockbuster movie Jawani Phir Nahi Ani, one of the highest grossing films of Pakistan, now has its most awaited sequel on its way, Jawani Phir Nahi Ani 2, whose trailer was released at an exclusive event held on 25th June, 2018 at Nueplex cinemas, Rashid Minhas Road Karachi.

Produced under the banner of Salman Iqbal Films and ARY Films in association with Six Sigma Plus, written by the ace writer Vasay Chaudhry and directed by the talented Nadeem Baig, the man behind the films first installment, and Punjab Nahi Jaungi, the unparalleled blockbuster of Pakistan by ARY Films.

The sequel also boasts of a grand star cast which has the addition of some popular names including the renowned host and actor Fahad Mustafa as well as the beautiful actresses Mawra Hocane and Kubra Khan in lead roles. Continuing from the first edition are Humayun Saeed, Vasay Chaudhry, Ahmed Ali Butt, Sarwat Gillani, Uzma Khan in lead roles as well as Safina Behroz, Kunika Lall, Shehzad Khan, Kanwaljit Singh, Sohail Ahmed and Omer Shahzad in supporting roles.

The story of Jawani Phir Nahi Ani 2 revolves around the lives of four men that is full of drama and comedy. The audiences can expect a fun-filled rollercoaster ride and full-fledged entertainment for the whole family. The film is shot in most beautiful and exotic international locations of Turkey and Dubai.

Salman Iqbal, the Founder and President of ARY Digital Network and producer of the film stated, “We have high expectations from Jawani Phir Nahi Ani 2 and have full faith that it will add to the legacy of the first installment, proving to be a stellar success.”

Jerjees Seja, CEO ARY Digital Network and producer of the film said, “I believe the brilliant trailer speaks for itself. JPNA 2 is the most sought after franchise and its marketing will be supported by sponsoring partners who will be going all out to promote the movie at the at the time of release”.

Humayun Saeed, the producer and actor of the film, said, “We have left no stone un-turned to make this movie bigger and better in terms of production. Also, the whole cast has put in their best efforts and the audiences will be able to see that in the trailer.”

Shahzad Naseeb who is also the producer of the film said, “JPNA 2 is a big effort from our side and I am confident that the film will make its mark on the cinema circuit when it comes”.

Nadeem Baig, the director of this movie, stated “This movie is made on a much larger canvas than the first installment and each and every actor has put their heart and soul in the making this movie shine. Hoping for the best!”

The film is slated to release this Eid-ul-Azha.

Back to Back Premieres of Load Wedding Took Media by Storm