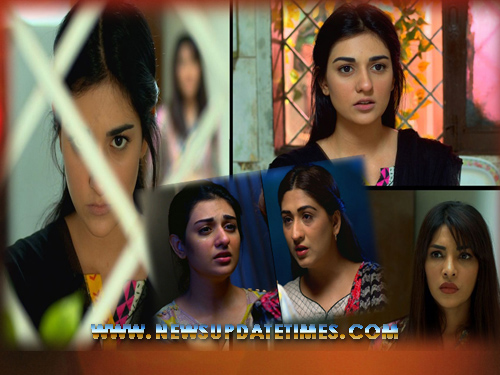 The story spins around Azra (Sarah Khan) who is crazy in love with her husband, Shahmeer (Agha Ali) and is an obedient wife. On the other hand, Shahmeer betrays her and marries her close friend Mona (Zhalay Sarhadi). Azra gets shattered with the news and ask her mother in law (Shgufta ejaz) to never let Mona enter her home. But Azra’s sister in laws being the bad girls provoke Mona to live with them as she has the equal right to reside there as she is expecting a child. Innocent Azra gets devastated to see Mona and Shahmeer in her home. Mona takes an edge of that and stole her bedroom too. Azra is also pregnant but Shahmeer doesn’t pay heed to that and take her for granted like forever.

On the other hand Shahnawaz (Shahmeer’s elder brother) leaves the house because of ill treatment to Muskaan (Shahnawaz’s wife) by the family. Shahnawaz’s family leaves no stone unturned to make her life miserable; and that is why she moves back to her own home.

In episode 13, Shahnawaz’s family reaches his office to take him back home and gets shocked by the news that he’s getting transferred by the company and emotionally blackmail him. But he doesn’t agree to move in again and offers financial help to his mother that she denies taking.

Azra acts totally insane when Mona tries to talk to her and terrifies her by her behavior. Later Muskaan comes to meet Azra and suggests her to fight for her self-esteem and rights and stop crying for Shahmeer. Azra is unable to handle Shahmeer’s unfaithfulness but finally decides to take a stand for her child. She leaves everyone dumbfounded by speaking for her rights and equal share in the house.

We are highly intrigued by the latest twist in the story and waiting impatiently for the next episode of Mere Bewafa which is broadcasted every Wednesday at 8pm only on A-Plus TV!

Music of Load Wedding Is Scheduled to Release on August 1,...