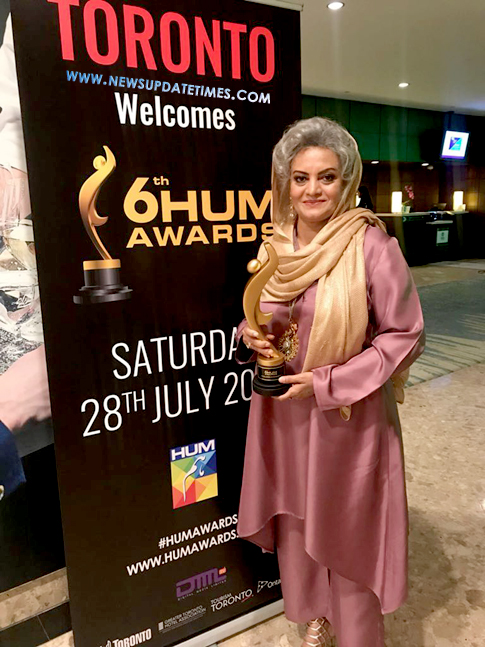 Lahore (Muhammad Yasir)  The owner of Depilex Group and Depilex Smileagain Foundation, Masarrat Misbah is a beauty veteran and a renowned philanthropist of Pakistan. Recently, at the 6th HUM Awards held in Toronto, Canada, the humanitarian received the Excellence in Humanity Award.

The pioneer of the beauty industry and the force being introducing Halal Makeup in Pakistan – after beautifying already gorgeous women, Masarrat Misbah took the pledge to bring smiles on those faces that are impaired by heinous acid attacks.

Acid violence is a vicious crime that leaves victims deeply scarred for life and haunts them every moment of their being with disfigurement and social isolation that is impossible to endure. In Pakistan, women are the key target of marring acid attacks. Considering this prevalent issue that challenges life’s very existence, Masarrat Misbah established Depilex Smileagain Foundation in 2003 for acid victims and devoted herself towards bringing awareness to this cause.

While receiving the award, Masarrat Misbah stated, “Though the award is encouraging but in reality this award is for those beautiful, resilient and brave acid survivors who got back their lives after almost losing it and learned to smile again. I am grateful to everyone who supports them and with your love we will make their lives more beautiful, bring more happiness into it and will enthuse them to smile again.”

Masarrat Misbah has been serving these fighters and bestowing them with hope and self-confidence for almost 2 decades and Pakistan is proud to have her. The humane received a standing ovation while accepting her award for her evangelistic efforts against this horrendous crime.