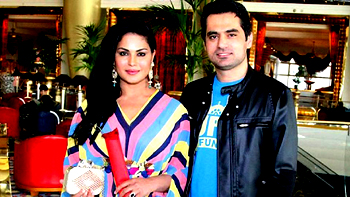 Lahore – Actress Veena Malik has ended her three-year-old marriage with Asad Khattak after a family court here granted them divorce.

The court in Lahore accepted Veena’s ‘khula’ (divorce) application and ruled in her favour after non-pursuance of the case by Mr. Khattak. As she had filed for divorce, she will to have return 25 per cent of the ‘haq mehr’ (dower money) to Mr. Khatak.

According to a court official, the 33-year-old actress had filed a plea seeking divorce in the Lahore family court in first week of this January as the couple had developed differences and could not live together.

The court had summoned Mr. Khattak but he neither appeared nor filed a reply.

On this, the court accepted Ms. Veena’s plea and issued a decree last month validating divorce between the couple, the official said. The couple kept the development under wraps.

They had got married in December 2013 in a court in Dubai and have two children.

Neemar by Shazia Deen – first of its kind jewelry concept...