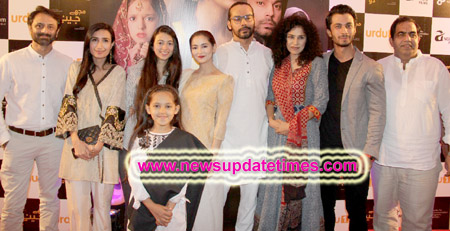 Lahore –  The upcoming drama Mujhay Jeenay Doh is all set to go on air from 11th September, 2017 on URDU1.

Angeline Malik’s directorial Mujhay Jeenay Doh revolves around serious issues and questionable rituals such as domestic violence, child marriage that are prevalent in our society. The story incorporates all the dramatic elements, and at the same time sets out to educate the audiences on social issues that are embedded in our culture, and bringing forth women empowerment.

Nina Kashif, General Manager Marketing at Urdu1, stated, “There is a strong need to address these social evils that are still present in many societies of this country especially in rural areas.  I hope the drama serial message helps in improving the mind-sets of certain communities especially the ones with limited exposure to the outside world.”

The talented Shahid Nizami has written the script for this serial, and it is produced under the banner of Angelic Films, spearheaded by the award-winning Angeline Malik, in collaboration with Center for Communication Programs Pakistan and support from Palladium Pakistan under the Empowerment, Voice and Accountability for Better Health and Nutrition. Angelic Films is known for the longest running television series in Pakistan, Kitni Girhein Baqi Hai, which highlights women related issues in our society.

“I have always been an advocate of women empowerment, and I feel fortunate to be a part of this drama as both director and producer. I strongly believe that awareness of such social issues needs to be highlighted through the TV medium,” stated Angeline Malik, the producer and director of this play.

“Entertainment Education is a powerful tool to raise awareness about such issues in our society and brings multiple stakeholders on the same page,” said Atif Ikram Butt, Executive Director Center for Communications Programs Pakistan.