News Update Times
Home Entertainment Teefa in Trouble, but he is not (Movie Review: Teefa... 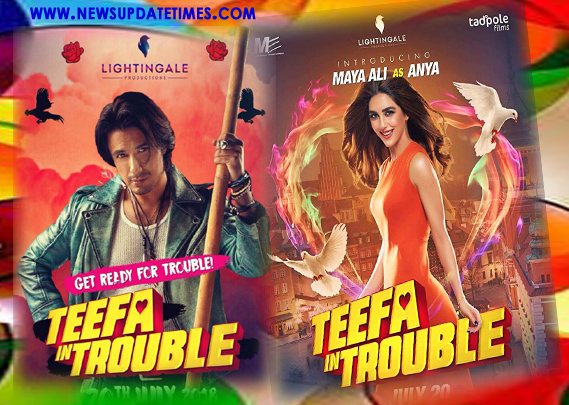 The Premier of the most awaited film of Ali Zafar is last night in Lahore where the presence of all stars of film industry, fashion industry and others famous personalities make this night more joyous and memorable.

Now we talk about the film story, characters and others departments of the film. Story revolves around  a Lahori boy Teefa (Ali Zafar) who can do everything  for the sake of the money. He is the only son of (Semi Raheel). Butt sb (Mahmood Aslam) who is the one of the famous Business man on his town. His son Billu Butt (Ahmed Bilal) and wife is (Asma Abbas). Bashira – Banzo (Javed Sheikh) with his second wife (Shofia Khan) and Daughter Ania (Maya Ali) is settled in foreign country where they are well known.

One day Butt sb (Mahmood Aslam)asked to his friend Bashir –Banzo (Javed Sheikh) for his daughter`s proposal but Banzo (Javed Sheikh) refused for that proposal. In reaction of that Butt sb (Mahmood Aslam) send his very closed person Teefa (Ali Zafar)  for a mission to come back Pakistan with Ania (Maya Ali), There Teefa (Ali Zafar)   met with Tony. Shah (Faisal Qureshi) and both of them got trouble. This situation creat a high sense of suspense for audience.

First half of film is very interesting which represent the real lahori masala. One of the most interesting character in this film is Sheikh sb (Nayyar Ijaz) . His performance is powerful throughout the film. Butt Sb (Mehmood Aslam) makes this film is more entertaing. Banzo – Bashira (Javed Sheikh) is as always playing his role honestly. Audience will also enjoy the role of Tony.Shah (Faisal Qureshi) also doing his best to perform his character. Teefa (Ali Zafar) Character in this film is different and unique who is actually lahori boy. Others Stars like Semi Raheel, Asma Abbas, Sofia Khan, Ahmed Bilal, Meher-un-Nisa,Tom and all others Played their role appropriately .

Film Music is average but “ITEM NUMBER is HIT”, cinematography is on its high. There are some weaknesses in the story  of the film but overall its good. Ahsan Rehim is the Director of this film and did his best. Leading personality of this film is Ahsan Rahim.

On the whole, Teefa is a simple tale told in a beautiful way, entertain the audiences thoroughly. At the box office, the youth is going to savour this Ali Zafar flick big time which will ensure commercial success.

Cinepax Cinemas Reward Card Is Back!