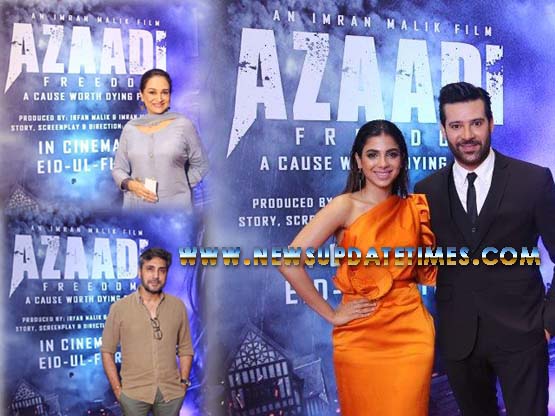 Moammar Rana and Sonya Hussyn play the main leads in the movie, and it also stars veteran actor, Nadeem Baig. The rest of the cast includes Maryam Ansari, Ali Bilal, Erum Azam, Maryam Khalif and others. The dialogues are penned down by Wajid Zuberi, and the beautiful music is composed by Bobby Wazir and Sahir Ali Bagga.

The story of Azaadi revolves around a man (Nadeem Baig) who devoted his life for Kashmir’s freedom, and is now imparting his vision to the next generation to keep the cause alive. Moammar Rana essays the role of a patriotic man, Azaad who follows his father’s footsteps and dedicates his life towards the cause of Kashmir. Sonya Hussyn plays the role of a feisty journalist, Zara who is also the love interest of Azaad.

Azaadi is produced by Imran Malik and Irfan Malik, sons of the veteran film producer/director Pervez Malik. It is directed by the talented Imran Malik, who is also the man behind the story and screenplay of this movie.

“We are hoping to get a good response from the viewers as I believe the audiences will be able to connect with this movie, especially the youth,” stated Salman Iqbal, the Founder and President of ARY Digital Network.

“The movie was well-received by the audiences at the premiere, and we hope to get the same response after its release on Eid-ul-Fitr. With Azaadi’s strong content, talented cast and brilliant direction, the movie will surely be liked by the viewers nationwide,” stated Jerjees Seja, CEO ARY Digital Network.

“A film of such a big canvas has never been attempted before in Pakistan. The movie is shot in the beautiful locales of Azaad Kashmir and Northern areas of Pakistan, and we have tried to bring out the essence of Kashmir and their struggle in this movie. I believe it is my responsibility to carry forward my father’s legacy and make him proud,” stated Imran Malik, the producer, writer and director of the movie.

“This movie is a complete package with elements of patriotism, action and an intense love story. I strongly believe that the audiences will enjoy this movie immensely,” stated Irfan Malik, the co-producer of the movie.

The movie is all set to release nationwide on Eid-ul-Fitr.

Kelly Clarkson shares the most TMI story ever — and it’s...