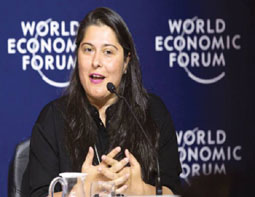 Web Desk – Davos– Academy Award Winner and the Co-Chair at 47th World Economic Forum Annual Meeting, Sharmeen Obaid-Chinoy will be featuring in an exclusive one-on-one session with Bollywood director and producer Karan Johar titled ‘A Conversation with Karan Johar and SharmeenObaid-Chinoy’ on 18th January 2017 at Davos-Klosters.

In addition to this, leading Hollywood Actor George Clooney met SharmeenObaid-Chinoy where they discussed her upcoming projects.

Sharmeen is the first artist ever to Co-Chair to prestigious forum’s annual meeting which is taking place in Davos-Klosters till the 20th of January 2017, under the theme “Responsive and Responsible Leadership”.

The World Economic Forum Annual Meeting for 2017 is highlighting five distinct challenges facing the word in 2017. A breakdown in global collaboration, loss of identity, slow economic growth,a crisis in capitalism and preparing for the oncoming Fourth Industrial Revolution.

Along with SharmeenObaid-Chinoy, taking a principal role in shaping the discussion at the Annual Meeting 2017 are Co-Chairs Brian T. Moynihan of Bank of America, HelleThorning-Schmidt of Save the Children International, Frans van Houten of Royal Philips and Meg Whitman of Hewlett Packard Enterprise.