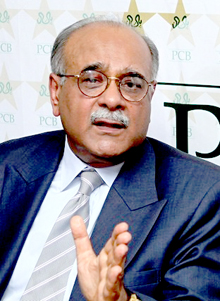 LAHORE – Hours after a parliamentary committee on Wednesday expressed reservations over cricket players doing push-ups to celebrate victories during matches, chairman of PCB’s Executive Committee chairman Najam Sethi clarified that the celebrations were done at the discretion of players.Clarifying media reports, Sethi further said there was no ban onperforming celebratory push-ups.However, the statement contradicts Sethi’s reported assurances to the parliamentary committee in which he said the practice was limited to the England tour and would not happen again.Sethi also went on to add that the media should refrain from politicising the country’s national cricket team.He also appreciated the Pakistan Army for providing fitness training facilities to the PCB.Earlier, PCB official Sethi assured the IPC Standing Committee that players would be barred from the push-ups when the ruling party MPs raised the concerns.

1st IGFC National Taekwondo Championship 2020 kicked off with a bang