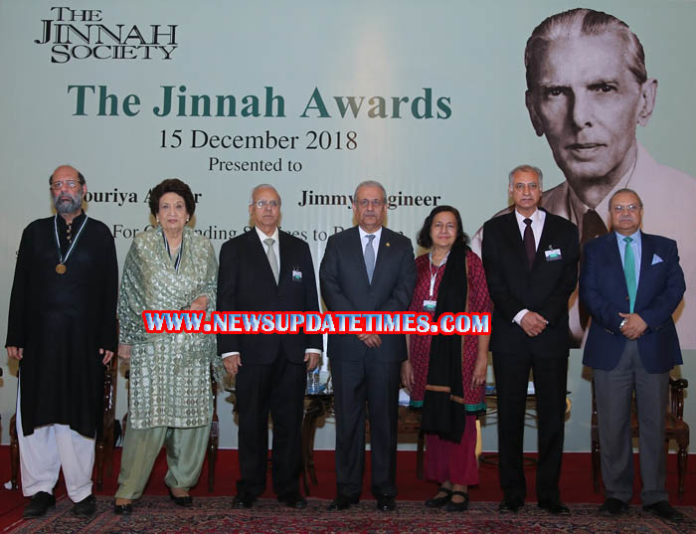 Lahore (Muhammad Yasir)  The Jinnah Society conferred its prestigious Jinnah Awards on prominent artist and social worker Jimmy Engineer and SOS Children’s Villages Pakistan Founding President Souriya Anwar in recognition of their selfless services for the humanity at large particularly for the special and orphaned children. Former Senate Chairman, Senator Mian Raza Rabbani, who was the chief guest of the award ceremony, presented the Jinnah Award to both winners. He said that he was honored to hand over the Jinnah Awards to Souriya Anwar & Jimmy Engineer in recognition of their outstanding & dedicated services to Pakistan.

The Jinnah Society was established on 23rd April 1997 at Karachi and has completed 20 years of existence in Pakistan. The main objective of the Society is to propagate the principles, ideals and vision of Quaid-e-Azam as a nation building exercise and in the development of democratic leadership in the role model of Mr. Jinnah. Another activity of the Society is the conferring of “Jinnah Award” to a person who has rendered outstanding and meritorious services to Pakistan and its people.

On this occasion Senator Mian Raza Rabbani appealed to the Sindh government to implement the orders of the Sindh High Court under which the Flagstaff House was to house a library, an audiovisual center and a museum. “None of these facilities, however, could be set up within the historic place, which later went to the provincial government under the 18th Amendment to the Constitution” he added. He also said that the Quaid wanted Pakistan to be a welfare state. He referred to the Quaid’s Aug 11, 1947 speech, and said “It’s difficult to find it because it speaks of fundamental human rights, minority rights, and what Pakistan must not be; a theocracy. But, this is not what the state had envisaged Pakistan to be after Jinnah’s death. That’s why the Flagstaff House remains without a museum, a library and an audiovisual center, so people might not know the exact purpose for which Pakistan was made.”

Continuing on the same subject, he pointed out that the three fundamental principles of the Quaid — Unity, Faith and Discipline — had been ‘rearranged’ as Faith, Unity and Discipline, under a government notification dated Jan 11, 1955. According to him, whenever the ruling elite of Pakistan talks about a change it wants to shun two things — provincial autonomy and the parliamentary form of government — both of which, he believed, were dear to Quaid’s heart..

Liaquat Merchant S.I. President, The Jinnah Society said that The Jinnah Society seeks to propagate the principles, ideals and vision of the great man as a nation building exercise even today, more than seven decades after Jinnah passed away.We will continue to aspire to achieve the Pakistan envisioned by Quaid-E-Azam Muhammad Ali Jinnah which is now a view shared by the political divide.”

Ashraf Wathra, Founder Secretary General, The Jinnah Society in his welcome address said that “the work of Jinnah society and the propagation of Jinnah’s vision for Pakistan will continue to shine as a beacon of light on this nation and will hopefully inspire our younger generation to serve this country with loyalty and dedication which Pakistan expects from each and every citizen of Pakistan.”

On receiving the Jinnah Award, SOS Children’s Villages Pakistan Founding President Souriya Anwar said “We must learn a lesson from the uncompromising morality of Quaid-e-Azam if we are to ever achieve his dream of a society based on the principles of honour, integrity, equality and social justice”. Souriya Anwar is a dedicated social worker with over four decades of service to humanitarian causes. Her interventions cover many social issues and, in particular, the welfare of orphans, the disabled, health, education, women’s uplift and the care of the aged. She is recognized as an expert in the field of social welfare, whose advice is regularly sought on related issues. Her major contribution to nation building has been the establishment of SOS Children’s Villages Pakistan in 1975. Under her leadership, this has expanded to 52 projects in all parts of the country, and is recognized as the nation’s leading organization in the field of child welfare. It is trusted and supported by the public and the government, and is completely self-financed. She has received numerous awards for her passionate espousal of the rights of the less advantaged.

Renowned artist and social worker Jimmy Engineer said that “I am a simple servant of Pakistan because all my life I have served my beloved country as an artist to portray the positive image of Pakistan. I will continue to promote and project soft, positive, moderate and forward-looking image of Pakistan and its peace-loving people before the comity of nations through my art, delivering talks and interacting with people from all walks of life”. A peace-loving man, Jimmy Engineer is widely known as Pakistan’s indefatigable crusader for the oppressed, disabled, mentally handicapped, impoverished and generally for all who need him as he has the ability to communicate with people from all walks of life. Though he already has over 3000 paintings and more than 1000 calligraphies over 1500 drawings to his name besides the 700,000 prints in private collection in more than 60 countries, selling his work is not why he paints. Like his art he simply aspires to spread his love for people wherever he goes and is ceaselessly pursuing the course of charity as his heart is sold to humanity for the rest of his life.

Ameena Saiyid OBE, S.I. Secretary General, The Jinnah Society in her closing remarks said “The Quaid’s achievement was to have united an economically and geographically diverse and multicultural and multiethnic people into working towards the same goal for a considerable period of time.”

So far, the Jinnah Award has been given to Abdul Sattar Edhi, the founder and Chairman of Edhi Foundation; Mr. Graham Layton, the founder and Chairman of Layton Rehmatullah Benevolent Trust for establishing eye hospitals in Pakistan; Hakeem Muhammad Saeed for establishing the Hamdard Foundation and Hamdard University; Dr. Ruth Pfau, Chairperson, Marie Adelaide Leprosy Centre, Karachi for outstanding services to Pakistan over a period of more than 40 years; Dr. Akhter Hameed Khan to whom the award was conferred posthumously for his outstanding and dedicated services to the people of Pakistan in the shape of Orangi Pilot Project; Dr. Ishrat Hussain a former Governor of State Bank of Pakistan for his vision and services in regulating banking policy which resulted in domestic growth; Air Marshal (Retd.) Asghar Khan for his outstanding and dedicated services to the cause of democracy and human rights in Pakistan; Former Chief Editor – Dawn late Ahmed Ali Khan for his outstanding services in the field of Journalism; Dr. Adib Rizvi, Professor and Director, Sindh Institute of Urology and Transplantation (SIUT); Mr. Ibn Adur Rahman, Director of the Human Rights Commission of Pakistan (HRCP); Mr. Imran Khan, Founder and Chairman, Board of Governors, Shaukat Khanum Memorial Cancer Hospital and Research Centre; Mr. Ardeshir Cowasjee who rendered outstanding services to Pakistan in his respective area of service. 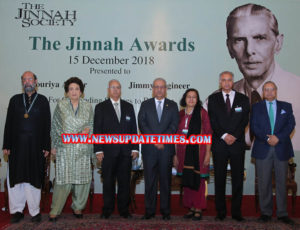