Lahore (Muhammad Yasir) In our region, a turban or “paagh” is considered a symbol of honor. Accordingly, Fatima Fertilizer invited 180 of its top performing dealers from all over Pakistan to attend a special awards ceremony held in recognition of their outstanding performance and support to the company. The awards were associated with the title of “Sarsabz Paagh” with the objective of recognizing and encouraging those Sarsabz dealers who attributed their success to the success of Fatima Fertilizer. More than 40 high-profile farmers who achieved top yields in their districts were also invited to the event along with the dealers. The company honored them and expressed its commitment to creating a deeper bond with the end user of their fertilizers i.e. the farmers. These farmers are key recommenders of the latest technology, nitrate-based Sarsabz Fertilizers and high-end farm services provided by Fatima Fertilizers.

The invited dealers expressed their full confidence in Fatima Fertilizer who has always promoted their important role in ensuring the country-wide availability of fertilizer to help the farmers. The event was attended by senior officials of Fatima Fertilizer, including Rabel Sadozai, Director of Sales and Marketing at Fatima Fertilizer.

While expressing her views, Rabel Sadozai said, “Dealers play a pivotal role in ensuring country-wide availability of fertilizer to support the farmers. The main purpose of introducing the Sarsabz Paagh program is to honor and recognize the important role of Sarsabz dealers in enabling the agriculture sector to contribute toward economic prosperity and achieve food security at the national level. While the havoc caused by recent floods has inflicted serious damage to the agriculture sector, it also indicates that we need to work together with unity and mutual recognition to recover from this crisis.”

Sarsabz Fertilizer has long been a strong advocate of giving due importance and recognition to Pakistan’s underserved farmers in order to curb national food security challenges in the face of constantly increasing population and food demand. Sarsabz Fertilizer is constantly striving to counter the negative impact of the current flood crisis on our national food security and the phenomenal expected increase in the future demand for staple food in Pakistan.

The event concluded on a high note where all participating dealers pledged to continue playing a vital role in advising the farmers on achieving maximum crop yield. Under the Sarsabz Paagh program, while selected dealers were recognized as brand ambassadors of Sarsabz to boast its signature outlets across the country, selected farmers were also declared to be a part of Fatima demo plots, field days, and high-profile farmer events that will help educate and spread best practices amongst the larger farmer community. 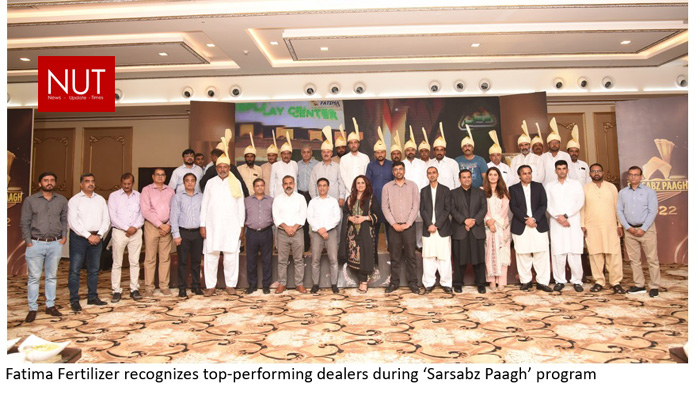