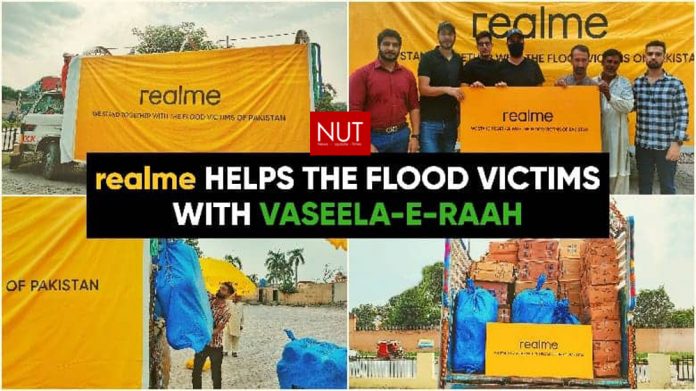 realme has stepped up to provide its assistance to people displaced by the catastrophic flooding in Pakistan Pakistan has recently been faced with a natural disaster of catastrophic proportions in the form of floods across the country. Although flooding during the monsoon season is not uncommon in the country, unusually heavy rain showers have exacerbated the situation leading to the worst flooding seen in Pakistan in recent times. This has put Pakistan in a state of humanitarian crisis. The flooding in the region has resulted in mass destruction with more than 30 million people affected by the rising water levels across the country and entire villages submerged under water. The damage has been widespread, leading to loss of lives, property, and livelihoods for those affected. realme believes that it is more important to stand together in the bad times than in the good. The tech democratizer has received a great deal of love from the Pakistani market since entering the country in 2018, rising in popularity at a meteoric rate. For this reason, realme wants to show the Pakistani public that it cares deeply for them and appreciates the support they have provided to the smartphone brand over the years. The spirit of giving back in turbulent times is ingrained in realme’s ethos which is why it has gathered resources to create aid packages, partnering with Hadiqa Kiani’s Vaseela-e-Raah campaign to disseminate these supplies to the disenfranchised around the country. The contents of realme’s aid packages are intended to provide the flood victims with the basic necessities of life that the flood has robbed them of. These supplies include a tent to set up shelter, blankets and bedding to sleep on, water filters to ensure availability of pure drinking water, and sanitary napkins for women’s hygiene needs. realme also included a fundraising element into its last two events, the screening of the Asia Cup Finals and the realme 828 Music Party, in order to improve the quality of aid that the smartphone brand was able to offer to those in need. realme is ready to do the needful and will work diligently to contribute towards relief and rescue efforts across the country as much as possible. It cannot be emphasized enough how important it is that everyone plays their part, in whatever capacity they can, to uplift those that are victims of circumstances outside their control such as natural disasters. It is only with the contribution of others that the country can move swiftly towards the path of recovery for the victims as well as the nation. realme urges you to do your part because you might make an immense change in someone’s life.