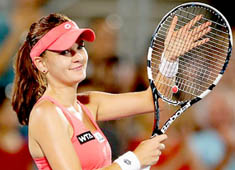 SINGAPORE-Poland’s Agnieszka Radwanska overpowered Karolina Pliskova 7-5 6-3 on Friday to clinch the last available place in the semi-finals of the WTA tour championship and stay on course to defend the title she won last year.

Radwanksa, who made a stunning comeback to win the 2015 tournament despite losing her first two round-robin matches, made it through to the last four again after having lost her opening match when she beat Pliskova in a sudden-death showdown.
The 27-year-old will now face world number one Angelique Kerber in Saturday’s semis with the winner to play either Russia’s Svetlana Kuznetsova or Dominika Cibulkova of Slovakia.

Kuznetsova suffered her first loss of the tournament on Friday when she was beaten 3-6 6-0 6-1 by Spain’s French Open champion Garbine Mugurza but the result had no bearing on the semis with the Russian already assured of finishing top of the White Group and Muguruza out of contention after losing her first two matches.
“It was a dead match, but it kind of shows if the desire is there or not,” said Mugurza.
If you’re like, ‘Oh, man this match is so, you know, you know’, you kind of let it go.
But I’m like, ‘no.
I can’t do that.
‘”Pliskova, who qualified for the elite end-of-season event when she reached the final of the US Open last month, led 4-2 in the opening set before the more experienced Radwanska took control on the key points, capitalising on the Czech’s 29 unforced errors, which included hitting two routine overheads into the net late in the second set.

“It was a very tight match,” Radwanska said after she finished runner-up in the group standings.
I think I was waiting and praying that (the) first serves won’t be in, then there’s a chance for a second serve.
She is one of the best servers on the tour.Kuznetsova finally ran out of steam after winning a tournament in Moscow last weekend just to qualify for the WTA Finals then winning two gruelling matches at Singapore’s Indoor Stadium.
The 31-year-old seemed to be in cruise control after she took the opening set against Mugurza but won just one game in the last two sets as the physical effects of the past week began to take a toll.”I’ve done the most important job in the past matches,” Kuznetsova said.
“You definitely don’t want to lose the match.You try to fight (but) sometimes the lack of energy just won’t let you do that.”