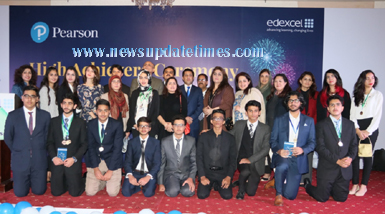 Islamabad  – This year, over 200 students from different cities achieved Pearson-Edexcel awards in four different categories including World, Region, Country and Province. These students achieved recognition in global qualifications. In recognition of student’s efforts, a small ceremony was organized by Pearson in Islamabad to present them with medals and shields. The outstanding performance awards have been given to students who obtained eight ‘A’ and above Grades in International GCSE and A-Level. Froebel’s Higher Learning Islamabad, Kohinoor Grammar School
Faisalabad, Ems High School Islamabad, British Overseas School Karachi, Beacon Light Academy Karachi, Roots IVY International School, Roots Millennium Schools, Beaconhouse School Lahore, Lahore Grammar School students achieved Top in World category.
The Pearson High Achievers Awards was attended by Mr. Faisal Mahmood, Country Manager-Pearson, Mr. James Hampson, Acting Country Director, British Council, Mr. Hassan Khattak Director Exams British Council Pakistan, Mr. Waqar Shah Commercial Manager, high achievers including teachers, schools, parents and distinguished guests. In addition to this, more than 40 teachers have been given Best Performance Award to recognize their efforts. The outstanding
performance awards have been given to students who obtained eight ‘A’ and above Grades in International GCSE and A-Level. Pearson is UK’s largest awarding body offering academic and vocational qualifications in collaboration with the British Council hosted Academic Award Ceremony here today for the students who achieved outstanding results in their primary, International GCSE and A Level examinations in 2017. Mr. James Hampson, Acting Country Director, British Council recognized the efforts of teachers and students for academic excellence. He said that, the UK Government will ensure to create opportunities for Pakistani students to introduce foreign qualifications. The qualifications offered by Pearson-Edexcel strengthening state of education in the country. Mr. Rod Bristo President Pearson UK and Core Team said, Pakistan is important country because we invest here and have high achievers in the country, they are continuously perform well in their exams. I am thankful to British council for their partnership with Pearson and it is really valued for us. I would like to congratulate the high achievers, teachers and families. In a welcome note, Mr. Faisal Mahmood said, the High Achievers Awards Ceremony is a special occasion, which provides an opportunity to recognise and celebrate the extraordinary achievements of some of the most talented students in Pakistan. The students recognised today have achieved results that compare well with students all over the world; students in Pakistan have been achieving outstanding results consistently over the years. While we focus on celebrating students in this ceremony, there are many other people who we recognise at the same time – whose support and commitment has made these achievements possible. We thank and celebrate the collective efforts of school management and especially teachers.