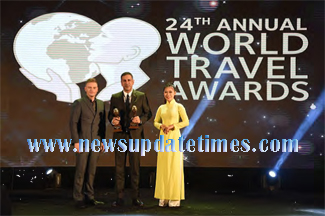 [Lahore, 18th December, 2017]: Oman Air, the national carrier of the Sultanate of Oman, has been awarded “World’s Leading Airline – Economy Class” at the World Travel Awards. The World Travel Awards were presented last week at a gala dinner held at Vietnam. The national carrier was also awarded the ‘World’s Ultimate Service Award in Hospitality’. The awards were received by Hamad Al Harthy, the Acting Regional Vice President – Far East, on behalf of Oman Air. 2017 has been a stellar year for Oman Air; the airline has been presented with a multitude of awards and accolades from renowned organisations around the globe, including four World Travel Awards.

Acting CEO of Oman Air Abdul Aziz Alraisi said: “This is a fantastic way for Oman Air to conclude the year; winning four World Travel Awards, along with various other awards in 2017. These awards set the standards for the travel industry and it is testament of our quality services and product offering that we have consistently been voted the best. Oman Air is a successful, sustainable company and it is immensely rewarding to be recognised for our unique products and on board experience, in all classes.” 2017 award wins are not just limited to exemplary service; the airline was recently awarded the prestigious “Pay it forward” award by PAX International magazine for its Taiseer Initiative.

Less Worries, More Trust: OPPO Support Is Here for You