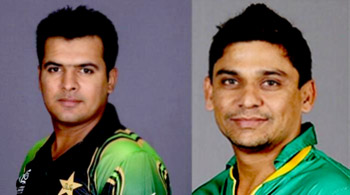 Dubai –  Web Desk- A formal charge sheet is being prepared by the Pakistan Cricket Board against two national cricketers for spot-fixing in Pakistan Super League, reliable sources told arysports.tv
PCB, on Friday, suspended two cricketers — Khalid Latif and Sharjeel Khan — for their alleged links with an international syndicate that attempted to corrupt the Pakistan Super League.
A highly-placed source told arysports.tv on Sunday that the PCB has enough evidence that two cricketers agreed to spot fixing in meeting with the suspected bookie, who is named as Yousaf.
“We have good evidence against these two,” said the source on condition of anonymity, adding that one player quickly reported the approach to the board while two others remained silence, but they didn’t agree to the offer.
“We are not preparing a formal charge sheet against them, which will be ready in a couple of days, we are also going to grab the person who connected them with bookies,” said the source.
The source further confirmed that the PCB had prior information of bookies possible attempt and hence, the board was keeping a strict check on everyone.
Meanwhile, after two days of reluctance and confusion, the festivity at the team hotel start returning on Sunday as players were a bit relaxed and met with fans roaming around in the hotel lobby.
On Saturday, PSL chairman Najam Sethi said an inquiry into Sharjeel Khan and Khalif Latif being linked to an international syndicate trying to corrupt Pakistan’s T20 league will take 10-15 days.
“The matter will move forward after the inquiry is complete,” Sethi said.—Agencies