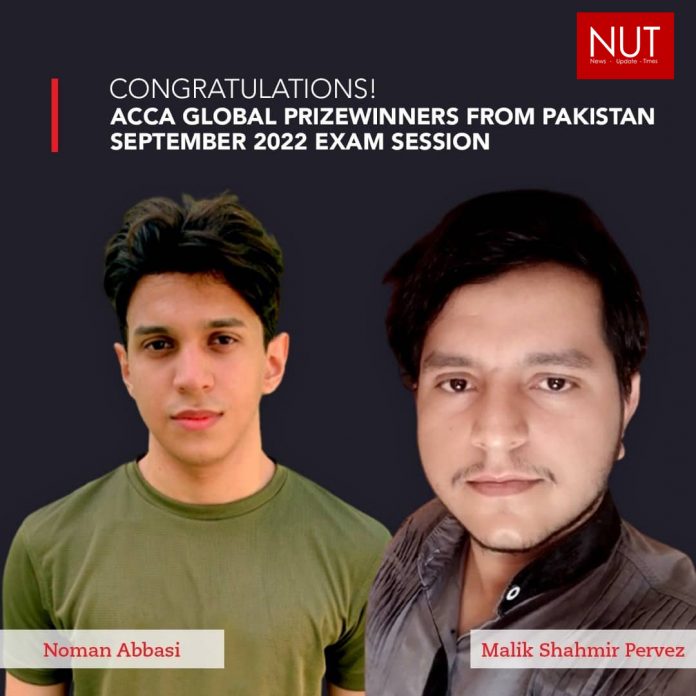 Pakistan (Nut Desk) Pass rates have been announced by ACCA (the Association of Chartered Certified Accountants) for students who sat their exams in September 2022. Two Pakistani students have made the country proud by scoring highest marks to qualify for the cash prizes. ‘83,630 ACCA students from around the world entered for the September sitting and It’s particularly pleasing to see Pakistani students shining in the exams and building a strong reputation for the country on a global level for top finance talent. It’s not about one or two meritorious students, we’re seeing a growing trend of ACCA students and professionals from Pakistan creating a global impact with their ability and ambition. This also proves how our people can compete and win globally if they’re offered right support and a global platform,’ said Rashid Khan, ACCA’s spokesperson for the Asia Pacific region. The ACCA Qualification rigorously tests the skills, abilities and competencies that a modern accountant needs, with a firm grounding in ethics and professionalism. It prepares students for a rewarding global career as a qualified and ethical finance professional. Malik Shahmir Pervez Malik Shahmir Pervez earned the global position for demonstrating stellar performance in the Advanced Audit and Assurance (AAA) exam which is considered one of the most challenging of all ACCA papers. Shahmir comes from a modest family and his father was a truck driver in Rawalpindi. He completed his early schooling at an Urdu-medium local school before joining the Army Public School (APS). Despite the fact that he had to adjust to English-medium in his new school, he qualified for a scholarship after proving his mettle in exams at APS. He then completed pre-medical at Fauji Foundation College with an A-1 grade but was unable to continue his education after the sudden death of his father who was also his best friend. For two years, Shahmir went through a severe mental trauma and would spend whole day in his room. With family’s love and support, he was finally able to come out of the emotional ordeal and ended the hiatus in his studies by opting to study the globally renowned ACCA Qualification. ‘I feel it’s important for everyone to talk about mental health more openly and the reason I’m sharing my struggle of coping with all sorts of anxieties is simply because I would like to tell those who’re currently going through a similar phase that it’s okay to be not okay and it’s never too late to press the restart button.’ After joining ACCA, this is Shahmir’s first global distinction and third national distinction. He loves studying with ACCA since he was never a fan of rote learning and would rather focus on understanding the concepts. ‘ACCA is the world’s most innovative professional body and the same is reflected in how it has designed its qualifications and assessments. With ACCA, you’re always ahead of the curve when it comes to the latest knowledge and most in-demand skills,’ said the AAA prizewinner. The 23-year-old who is only one paper away from becoming an ACCA affiliate sees his career at a big4 firm and would like to join the audit profession soon after qualifying with ACCA. When not studying, Shahmir keeps himself active by playing sports such as Table Tennis and Cricket. Noman Abbasi Noman Abbasi who’s celebrating his 22nd birthday this month is one of the two Pakistanis who also made the ACCA’s list of global prizewinners by scoring the highest marks in the Financial Reporting (FR) exam. Listening to the news, Noman’s father, who is a doctor by profession, had tears in his eyes. He proudly admits that his son’s achievement is undoubtedly the highlight of his life and nothing else can ever come close to the feeling of seeing one’s son or daughter succeed in such a coveted exam. Originally from Kashmir, The Abbasi family came to Karachi in search for better economic prospects some five decades ago. Noman’s father completed his MBBS here and went on to serve in the army. He has been running his private practice since 1982, the year he finished his military service. With father being a doctor and brother an engineer, Noman felt pressured to study pre-medical in college but he always knew his interest lied elsewhere. ‘I wanted something more exciting to do in my career and travel the world. So, accountancy was a natural choice for me.’ Soon after passing Intermediate, Noman chose to start his ACCA journey and has shown exemplary performance in all his exams so far. ‘When in college, I never felt great studying due to the lack of interest. But now I get such an adrenaline rush analysing the financial data and preparing reports that I don’t need any other motivation to stay focused.’