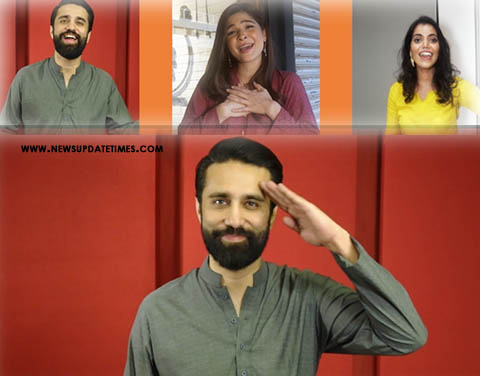 Lahore (Muhammad Yasir) Strepsils Stereo launched Season 2 with yet another national song, ‘Mera Pakistan’ – an original composed for this Independence Day. The platform continues its streak of producing stellar national songs second time in a row with artists including Ali Noor, Ahsan Pervez, Shiraz Uppal, Sara Haider, Ayesha Omar, Kami Paul, Rabi Peerzada and upcoming talent Haddi Uppal collaborating on this new feature. This song has been produced by Ali Noor and BIY Music and was launched on August 12.

Strepsils Stereo is Pakistan’s first and only ‘Acapella’ based music platform. ‘Acapella’ music is the unique genre produced either solo or by a group without using any instruments, just through vocal variations. Season 1 of the platform, launched in 2017, included three songs Khyaal Rakhna, Rang De and Dil Jo Chahey topping the charts, with an average of over 5 million views on each.

Talking about the launch of this song, Humayun Farooq, Marketing Director, Reckitt Benckiser Pakistan (makers of Strepsils) said, “We created Strepsils Stereo with the objective of bringing a fresh sound to the music palette of Pakistanis which can transcend beyond boundaries of age, gender or culture. We are kicking of this season with Mera Pakistan, an anthem featuring more than 100 people.”

Mera Pakistan with its beautifully crafted lyrics, penned by Ali Noor, reflect upon the feelings of the entire nation, serving as a reminder of the past and leaving with the chant for a better tomorrow.  The song has been carefully composed to deliver a message of unity, hope and celebration of diversity in Pakistan.

“Music is an important manifestation of the depth, diversity and vibrancy of a culture. Mera Pakistan speaks the language of a resilient youth who is hopeful for the change this nation has been waiting for.” said Ali Noor while talking about the first song of season 2.