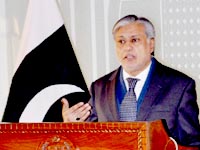 ISLAMABAD: Minister for Finance Muhammad Ishaq Dar otherday said after becoming a member of Organization for Economic Cooperation and Development (OECD), Pakistan was preparing to become a member of Open Government Partnership (OGP) Forum in order to ensure financial discipline, accountability and transparency.

The convention, he said, would facilitate international cooperation on national tax laws and provide administrative cooperation among member countries to combat tax evasion.

The minister said due to prudent economic policies taken by the government during the last three years the economy had been stabilized and the country was now forwarding on the path of sustainable economic growth.

Pakistan, he said, was rising as a sovereign economic power and would become the 18th biggest economy by 2030.

The country needed to achieve target of $30 billion foreign exchange reserves and growth rate of 7 per cent for poverty alleviation and provide employment opportunities to the people, he added.

The minister said the economic growth target for the current financial year was 5.5 per cent of Gross Domestic Product (GDP) and the government would hopefully achieve that.

He said due to the efforts of the government’s economic team the FBR had achieved 60% growth in revenues during the last three years.

He called upon all the political parties to work together for the country’s economic prosperity.

Lauding the efforts and contribution of SECP team in formulation of Companies Ordinance 2016, he urged them to continue playing their vital role in the implementation of law to ensure transparency and good governance in the country.

The law, he said, had been formulated in consultation with all the stakeholders.

Ishaq Dar said the corporate sector was a driving engine for the economic development.

The minister said due to proper property evaluation, the government’s revenue would further increase to five times for the benefit of the country.

Haroon Akhter, in his remarks, appreciated the SECP for Companies Ordinance 2016, saying it would enhance the confidence of investors in Pakistan.

Speaking on the occasion, the SECP Chairman thanked the Finance Minister for his full support in the formulation of the Companies Ordinance 2016.