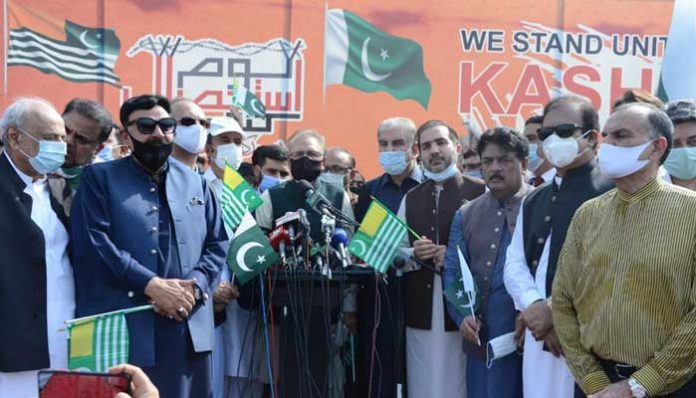 Pakistan is observing Youm-e-Istehsal Kashmir today to express solidarity with the people of Kashmir, as it marks two years of Indian occupied Kashmir’s(IoK) military siege.

Two years ago, on August 5 2019, the Narendra Modi government revoked the territory’s special status, withdrawing the autonomous status that the Kashmiris and Pakistan have vehemently opposed since then.

A host of events have been arranged in order to denounce the Indian unilateral, illegal actions against the Kashmiri people. Solidarity walks of one mile will be arranged in all the main cities, including the federal capital.

The participants of the walk will wear black bands and carry the flags of Pakistan and Azad Kashmir. A one-minute silence was observed across the country while traffic was also halted for a minute, and sirens were sounded. Radio and television channels will play Pakistan and Azad Kashmir’s national anthems immediately after the one-minute silence.

A rally was also arranged at the Ministry of Foreign Affairs to mark the day. Speaking to the rally, President Alvi said no Pakistani will rest until occupied Kashmir, under Indian military siege, is not liberated.

“Pakistan will liberate occupied Kashmir,” he said. “Let me warn India that Pakistan is a strong nation,” he added.

President Alvi said that Kashmir was to become part of Pakistan at the time of partition, if it were not for India’s wrongful actions. He said Islamabad would not hold talks with New Delhi until it reversed its August 5 actions.

He said India was changing the demographics of occupied Kashmir to suit its agenda, adding that New Delhi had trampled the principles of freedom and was setting back efforts to restore peace in the region.

Speaking to the media, Foreign Minister Shah Mehmood Qureshi said Pakistan will continue to support oppressed Kashmiris. “A day will come when they get the freedom from Indian occupation. Indian Aug 5 actions have been rejected by the people of Kashmir and the rest of the world,” he noted.