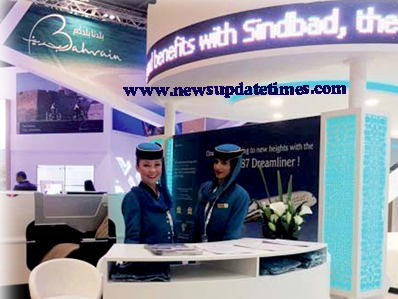 Lahore –  Oman Air participates in the World Travel Market, one of the leading events in the global travel trade calendar, held at Excel London during 6-8 November 2017.Oman Air’s impressive, two-story stand at WTM provides an ideal location for  formal and informal meetings, social gatherings and casual enquiries for the event. 2017 has been   a momentous year for Oman Air as the airline celebrates both its ten year anniversary of operating out of Heathrow and the introduction of ﬂights to Muscat from Manchester. Oman Air’s delegation is headed by the Deputy CEO and EVP Commercial Abdulrahman Al Busaidy.

Along with other senior management members of Oman Air and dignitaries from the Ministry of Tourism, will be meeting the trade guests and partners at a specially arranged reception marked to celebrate the tenth anniversary of Oman Air’s operations to Heathrow.
The national carrier for the Sultanate of Oman continues to invest in its products and services offering guests with a growing range of destinations. Demonstrating its continued commitment to providing excellent customer service and a seamless passenger experience, Oman Air is rolling out new call centres in selected destinations. These include Gurgaon, India, Bucharest in Romania and Kuala Lumpur in Malaysia.

In an endeavor to provide a seamless guest experience, Oman Air has entered into a number of airline partnership agreements. This guarantees easy and secure  on-line ticket sales as well as the introduction of new initiatives to make the customer experience as wholesome as possible.
On the awards front too,Oman  Air  has  been adding to its already impressive list of accolades with the two recent World Travel Awards Middle East 2017. For four years running the airline has taken the titles ‘Middle East’s Leading Airline – Business Class’ and ‘Middle East’s Leading Airline – Economy Class,’ voted for by travel and tourism professionals from around the world.
The airline has also been recently awarded along with  Muscat  Duty  Free  the  ‘Inﬂight Retailer of the Year 2017’ at an impressive event held in Palm Beach in Cannes, France.
Another important  event  to  be  organized  on the side-lines of WTM is the Oman Air Media Awards, UK. Having had a successful run the last three years, this year will see the announcement of the winners of the fourth annual Oman Air Media Awards on Tuesday  7 November.Over the last four years the awards have been incredibly successful and attracted a very high calibre of entries from prominent media. This year’s awards saw an excellent response once again, with entries from editors, journalists and bloggers, as well as other industry writers.

Meezan Bank, in collaboration with the Government of Sindh and DHA...