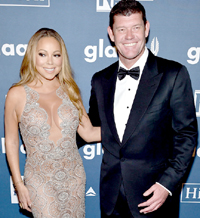 Mariah Carey is heartbroken in the wake of her and James Packer’s split.

A source tells E! News exclusively that Carey was “blindsided” when Packer dumped her “out of nowhere.” To add insult to injury, Carey only learned that her engagement to Packer was over when she saw it in the press, according to one insider.

“The split has been devastating for Mariah,” a source tells E! News. “She loved James and was planning to marry him… She made life changes for this man to prepare for their future as husband and wife, even relocating to LA, at James’ request, so he could be closer to his children. Everything she has done over the past year is to prove how fully committed she is to their life together. She really wanted this to work. And then, completely out of the blue, it imploded.”

The breakdown of their relationship “started in Greece”, says a source, with “some sort of outburst which everyone heard”. The father of three reportedly made a reference about things becoming “too much,” saying, “I don’t know if I can do this. I can barely take care of my own children.”

Carey and Packer were supposed to meet up in LA after the Greece incident “to talk through everything as adults”, says a source. According to one insider, they set up a date to meet this past week, but the day before the meeting was supposed to take place, Carey found out through the press that Packer had broken off their engagement.

“Mariah and James never met up after that,” says a source. “And they haven’t spoken. The way the split news was handled was incredibly upsetting to her.”

Those close to Carey are beginning to wonder if Packer “was possibly using her for her fame”, a source tells E! News. “He never received the kind of attention he got over the past year until Mariah was on his arm.”

As for the media speculation surrounding Carey and her backup dancer, rumored to be Brian Tanaka? A source tells E! News the longtime friends have a “completely platonic” relationship. Tanaka has “been a supportive influence” in Carey’s life over the past 10 years, says a source. “Right now they are just close friends,” says a source. “I can’t promise things won’t develop between them one day, who knows,” adds the insider. “But right now, the stories out there are an exaggeration and they definitely feel like a convenient ploy to make this whole mess look like her fault.