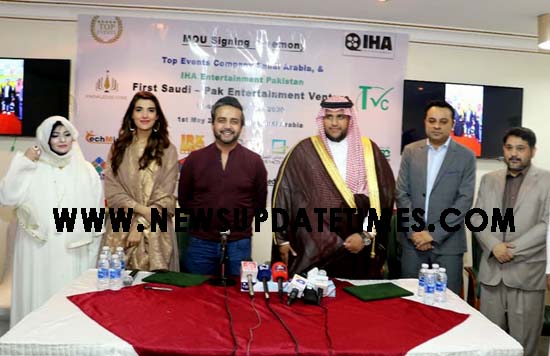 Lahore (Muhammad Yasir) The makers of Pakistanî blockbuster films Janaan(2016) & Parchi(2018), Imran Raza Kazmi, Hareem Farooq and Arif Lakhani, under the banner of IHA Entertainment recently signed a contract with Top Events Company for the promotion and production of Pakistani cinema, television and entertainment content in the Kingdom.

This joint venture between the two companies will encourage the collaboration for film and drama production, distribution in Saudi Arabia ensuring the promotion of Pakistani talent worldwide. The agreement was signed between Prince Abdul Aziz of Top Events Company and Imran Raza Kazmi of IHA Entertainment, parent company of IRK Films.

“We want Pakistani drama, film and talent to be promoted in Saudi Arabia as well and this contract between the 2 countries will bring betterment in terms of media relationships” stated Prince Abdul Aziz.

“It’s an honor for us to collaborate with Saudi Arabia for the better promotion of Pakistani films and dramas. IRK films will produce the dramas whereas IHA Entertainment will do events like concerts, comedy nights shows, distribution of films in the Kingdom. IRK films will also consider casting talent from across the world in their new ventures and this step will promote the softer side of Pakistan to the world” stated Imran Raza Kazmi.

“It is an extreme honour for me as an individual to be one of the first female actor to have my work, Parchi, showcased in Saudia Arabia,” comments Hareem Farooq. “With this agreement we look forward to creating more opportunities for the amazing work that comes out of Pakistan to be showcased to a new audience pool, which is just game-changing.”

Arif Lakhani said: “Through this collaboration we are aiming to give the talent and content here and around the world a chance to join us and work with us for the betterment of the industry on a whole.”

The agreement between the two companies was signed in Riyadh on 1st May 2018.