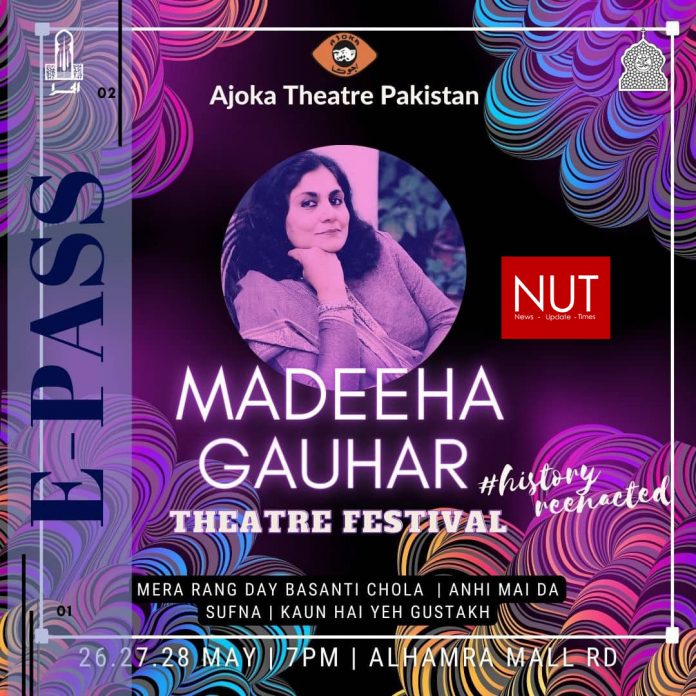 Lahore (Nut Desk) Preparations are in full swing for the Madeeha Gauhar Theatre Festival opening on Thursday (26th May). Ajoka actors are rehearsing for three landmark plays based on the the themes: “Sacrifice, Separation, Suffering”. The themes have been selected to mark the 75th anniversary of independence and partition. There will also be a special Indo-Pak session to pay tribute to Ajoka founder Madeeha Gauhar at 5 pm on Friday 27th May in Alhamra Hall 3. The session will be chaired by Justice (Rtd) Nasira Javed Iqbal and speakers will include Kamran Lashari, Sajida Vandal, Asghar Nadeem Syed and Shaista Sirajuddin. Eminent theatre practitioners from India including Neelam Mansingh, Kewal Dhaliwal and Arvinder Chamak, who are specially coming over from across the border to will also pay tribute to the theatre peace icon. The festival will kick off with a documentary “Becoming Bhagat Singh” by Nirvaan Nadeem, followed by Ajoka’s acclaimed play on Shaheed Bhagat Singh “ Mera Rang Day Basanti Chola”, in Alhamra Hall 2. Entry will be allowed on passes which are available from Alhamra or Ajoka office. E-passes can be downloaded from Ajoka Facebook.