Lahore (Qasim Ali) “Kathak is the only classical dance form which is still evolving, absorbing new influences and redefining itself with the passage of every decade, that’s why it is one of the most popular traditional dance art in the world and most importantly Kathak is a secular art form. It does not have any boundary, specific religion or a particular area. Kathak’s roots can be traced back to 400 BC, however, it evolved significantly and became a refined art form in the 10th century”, said the well-known cultural commentator and writer Ally Adnan while talking about the art of Katha and Kathak in an enriching conversation session with students at the Institute for Art and Culture (IAC).

While talking about conventional dance forms, Ally said that the Bharatnatium and Odissi are very rigid art forms in comparison with Kathak, which had great influence from Muslim civilization as well. He added that Kathak gained esthetic beauty during the Mughal rule. Its intricate costumes including Pishwas and Angrakha, music instruments, Salami or Aamad and Sufi elements are major Mughal ingredients which enriched this art form. Viewers can find the specter of Mughal courts, ethos of Hindu temples, philosophy of Sufism, beliefs of Muslims, Poetry, Literature, Dance and Music of Pakistan and India and the whole world in this dance form.

During the conversation, Ally Adnan also screened some remarkable performances to highlight the basic techniques and patterns of Kathak. During the question answer session with the students, he said that there was no music instrument in the classic form of Kathak; oral rendition was the main source for communication. Kathak dancers tell various stories through their hand movements and footwork but most importantly through their facial expressions.

Modern Kathak dancers emphasize more on exploration of conventional compositions as new compositions have very strict rules of Taal, Jati and Gharanas. While shedding light on Kathak’s journey in Pakistan, Ally Adnan informed the students that Maharaj Ghulam Hussain Kathak was a great performer, whose art was full with balance and esthetics, and he used his mind effectively during his performances. After that Naheed Siddqui carried this art gracefully with memorable performances based on beautiful balance, symmetry and esthetics. In recent times, there is no proper institute in Pakistan, where young performers may learn this art.

The participants including students, aspiring artists and faculty members took great interest in the session. This was the sixth program in the weekly cultural talk series and was held at the main auditorium of Institute for Art and Culture. 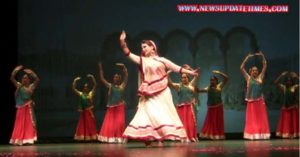