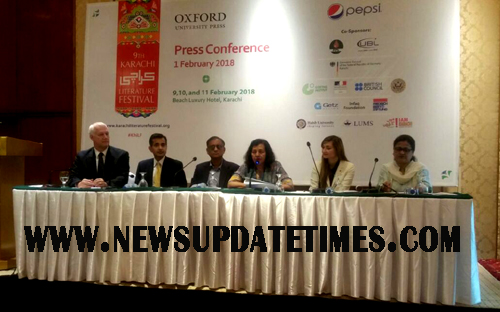 Karachi – The 9th Karachi Literature Festival (KLF), the country’s most anticipated literary event, is scheduled to be held on 9, 10, and 11 February 2018 at the Beach Luxury Hotel, Karachi. A vibrant programme of talks, interviews, panel discussions, readings, book launches, English poetry readings/slam, Urdu mushaira, Sindhi mushairo, stand-up comedy, author signings, performing arts, film screenings, open mic, book fair, and literary awards has been lined up. With ideas and subjects as diverse as cricket, child abuse, writing autobiographies, and pop culture being explored at the KLF, the event promises to be a literary and cultural feast.

Around 200 Pakistani and 30 international authors and speakers from ten countries will participate. Francis Robinson and Noorul Huda Shah will be the keynote speakers at the inauguration and the closing ceremony will be addressed by Anwar Maqsood, Amit Chaudhuri and Mani Shankar Aiyar. There will be 26 book launches and more than 70 sessions. This was announced by Ameena Saiyid, Managing Director, Oxford University Press (OUP), and Founder/Director, Karachi Literature Festival, and Co-founder, Children’s Literature Festival, at a press conference.

“Karachi Literature Festival, the ninth in this city, is like a beacon whose light spreads out far beyond the grounds of the Beach Luxury Hotel—indeed, far beyond this city and country,” said Ameena Saiyid. “The Festival has grown rapidly. Attendance rose from roughly 5,000 in 2010 to 200,000 in 2017” she added

While talking to the media, Ameena Saiyid mentioned that four prizes are awarded at KLF every year. These include the KLF-Pepsi Non-Fiction Prize, KLF-Getz Pharma Fiction Prize, KLF-German Peace Prize (Consulate General of Germany), KLF-Infaq Foundation Urdu Literature Prize, and Italy Reads Pakistan Award (sponsored by the Consulate of Italy). The submissions received for the prizes are evaluated by panels of jury members comprising eminent critics, writers, and scholars. Books shortlisted for these prizes were announced at the press conference.

The three books shortlisted for the KLF-Pepsi Non-Fiction Prize are Lahore in the Time of the Raj by Ian Talbot and Tahir Kamran; Urban Traditions and Historic Environments in Sindh by Anila Naeem; and Imagining Pakistan by Rasul Bakhsh Rais. The KLF-Pepsi Non-Fiction Prize of Rs 250,000 goes to the best non-fiction book originally written in English in 2016-2017 by a Pakistani or Pakistan-origin foreign national.

The KLF-Getz Pharma Fiction Prize will be awarded to the best novel or short story collection originally written in English in 2016-2017. The author (a Pakistani or a Pakistani-origin foreign national) will be awarded Rs 300,000. The Party Worker by Omar Shahid Hamid; Exit West by Mohsin Hamid; and Snuffing out the Moon by Osama Siddique are the three books shortlisted for this prize.

Prison Narratives by Akhtar Baloch; Indus Waters Treaty: Political and Legal Dimensions by Ijaz Hussain; and Imagining Pakistan by Rasul Bakhsh Rais are the three books shortlisted for the KLF-German Peace Prize which is a joint project of the Consulate General of Germany in Karachi and KLF. The first prize of 3000 euros is given to a fiction or non-fiction book that promotes peace, tolerance, and international understanding, written by a Pakistani or a Pakistani-origin foreign national, or any foreign national residing in Pakistan.

The KLF-Infaq Foundation Urdu Literature Prize of Rs 200,000 will be awarded to the best book of prose or poetry in Urdu. The books shortlisted for this prize include Deed wa Deed by Altaf Fatima; Qila e Faramoshi by Fahmida Riaz; and Aatey Hai Ghaib Sey by Anwar Sha’oor.

“KLF is not merely a local affair. With participants and visitors from all over the country, from all four provinces and all of our major cities, this is truly an all-Pakistan event. More so, with participants from UK, USA, Germany, Maldives, France, India, Singapore, Italy, and Canada, it is truly an international event,” said Asif Farrukhi, Co-founder of the Karachi Literature Festival.

Easypaisa and Board of Intermediate & Secondary Education Swat sign agreement...