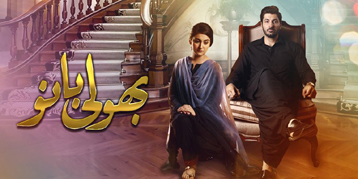 “Bholi Bano” a new play by GEO entertainment who ruled the rating charts and got tremendous response from the audience in previous months is now seems losing its charm and charisma due to unexciting twists, stereotypical scenes and sluggish pace. The main attraction of the play lies is sparkling romance between the lead couple played by Tajdar (Syed Jibran) and Bano (Hiba Qadir), but in recent episodes they hardly confront each other and cruel attitudes of the other leading lady Zinnia (Nimra Shahid) shocks the viewers.
The play carries an interesting plot, but story in not heading in a convincing way, Like injury of Subhan (Bano’s husband in play) is not recovering after so many episodes and his father’s absolute silence over his mother’s unkind attitude and mean remarks on him is very strange. It seems that actually he is step father of the subhan as he never spoke even a single word for continuous injustice and hatred. Play have very impressive supporting cast but roles of Samina Ahmad and Waseem Abass are so minute that they fail to leave any impact.
The refreshing chemistry of Tajdar and Bano prove the show stealer in earlier episodes, but now focus has shifted on another love tale (Shehla-Abid) which is less interesting and have nothing novelty in it. In addition, how easily Tajdar’s mother became fool by fabricated stories and lies of his daughter in law (Zinnia) about parenthood are hard to believe. She not even once talked with his son about the reason and believes completely in Zeenia’s irrational claims.
The play is based on a Novel written by Samra Bukhari and goes on air two days (Monday and Tuesday) in a week at 9 pm on Geo news. Tajdar infinite liking and desire to achieve the love of Bano impressed everyone, but why he is not making any effort in getting the love of his life. Bano is living in terrible conditions, works like maid and receives all the humiliation and abhorrence yet Tajdar is not realizing it.
If we analyze earlier episodes, all the actors have performed very well in their respective characters, Tajdar-Bano love hate relationship, zinnia’s snotty tantrums, catchy background score especially the alaap, Sukha’s unprecedented liking for Tajdar, Bano’s caring of his husband, are real plus points of the play till now but audience expects exciting encounters, punchy dialogues and gripping unfolding in the upcoming episodes as well. If all this happens then without any doubt “Bholi Bano” will be considered among best serials of the year.