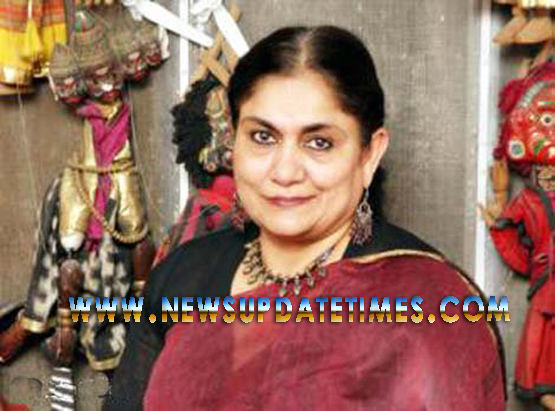 Kamlesh KumarKohli, leading theatre director from India expressed his deep sorrow in heartfelt message. He shared that I have more than often said in public that “My entire life’s work in theatre does not come anywhere near her only one production i.e. BULLA.  Two seminal productions Dara Shikoh and Bulla will never be forgotten. Whenever an authentic history of this subcontinent’s theatre will be written Madeeha Ji’s name will be etched in golden letters.

Veena Sirki, Ambassador, Founding trustee and Convener of South Asian Woman’s Network (SWAN) said that All her life, Madeeha has been an innovator, a creative personality and an unrelenting fighter for women’s rights and for a just, egalitarian, humane and secular society. Her contributions, especially through Ajoka Theatre, have already immortalised her. In SWAN, we will forever remember vividly Madeeha’s outstanding contribution to our collective efforts to empower the women of South Asia through gender equality, economic empowerment and changing firmly entrenched mindsets.

Madeeha firmly believed in cultural exchange and served as a bridge between Pakistan and Indian theatre community, that’s why theatre activists across the border are more shattered and feeling her demise as an irreparable loss.

Rani Balbir Kaur, Professor emeritus Punjab University, Theatre Director/Actor/Film-maker and close friend of Madeeha said that May she live in our thoughts and fond memories till eternity. Let the Mashaal of love that she lit May never extinguish and message of harmony and brotherhood amongst India and Pakistan endure.

Pran Nevile, eminent Delhi based author said that Madiha was a brave and creative genius who built up a galaxy of admirers on both sides of the border. With her drive, skill and dedication to the performing arts Madiha had emerged as a role model for the upcoming generation of artists. She has left a precious legacy of her memorable achievements. Personally I am indebted to her for making me a known figure in Lahore.

Madeeha’s courage and bravery in her battle against cancer was truly remarkable. Theatre activists are admiring her stimulating spirit and passion for theatre even in her last days.

Kewil Dhaliwal, chairperson of Punjab Sangeet Natak Academy based in Chandigarh said that in December 2017, when Madeeha visited this side of the border last time, it was to discuss a festival of Partition plays. He added that we bow in reverence to her substantive contribution to the cause of healthy and meaningful theatre.

Elizabeth Lynch, prominent British director from Round theatre London expressed her profound grief and love for Madeeha in these words. I learned so much from Madeeha and found her inspiring and great fun. We had adventures, creativity and many laughs together and that is how I will remember her.

Wilson Lee, senior program officer National Endowment for Democracy, (Asia Program) Washington D.C described that On behalf of NED, I wanted to express our deepest condolences for your loss. Madeeha was a national treasure and her passing is a profound loss for Pakistan, for all of us who believe in the power of art to transform society, the individual soul, and the world.

Huma Qureshi, Chairperson, National Commission on the Status of Women (Pakistan) expressed that Madeeha Gauhar was truly an icon of theater art and rights movement in the country. She raised the voice of oppressed and highlighted gaps in the system in a unique manner using theater as a tool to convey the message. Every theater play by Ajoka touched the issues of gender discrimination and violence against women and played a major role in changing the social mindsets.

Madeeha was a true legend and a role model for the women of Pakistan. Her death is a big loss not only for her family, but for the whole nation. Her services for the country will always be remembered.

Indian theatre circles have also arranged a tribute program to honor Madeeha Gauhar in the Chandigarh on 26th May, whereas a book featuring Madeeha’s theatre collaborations with Indian groups is also under production and will be launched very soon from Amritsar.