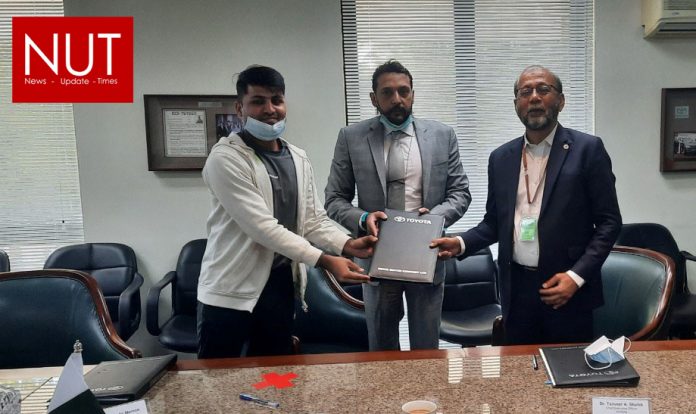 Lahore (Muhammad Yasir) Indus Motor Company (IMC), aligning itself with the spirit of Toyota’s global corporate initiative, “Start Your Impossible” (SYI), has signed on an emerging mountaineer, Asad Ali Memon as its newest SYI champion. Asad is a 24-year-old, high potential sportsman from Larkana, Sindh. Since the beginning of his mountaineering career in 2016, he has summitted several peaks both in Pakistan and internationally and made multiple records, which brought Pakistan under the spotlight of international attention.

In 2021, he set a world record when he climbed the Kilimanjaro and back in 20 hours. The Seven Summits Challenge is a mountaineer’s ultimate dream that entails climbing the seven tallest mountains in each of the world’s seven continents. Of these seven peaks, Asad has already conquered three in Europe, South America and Africa. His next stop is Mount Denali in Alaska, USA, the 3rd most prominent and 3rd most isolated peak on Earth, after Mount Everest. Asad will be the first Asian to scale the impressive 23,000+ feet mountain in May this year. Until then, he will be training for the climb in Sindh, Islamabad and Skardu.

At the tripartite contract signing ceremony with Asad Ali Memon and HANDS, at the Company’s head-quarters at Karachi, IMCs Chief Executive Ali Asghar Jamali expressed, “We believe in fostering opportunities for young people with aspirations and this is a great one to promote extreme sports in Pakistan and creating awareness. It also aligns with Toyota’s SYI and transformational vision, ‘Mobility for All’, for creation of a more inclusive and sustainable society in which everybody can challenge their impossible”.  Voicing his thoughts, Asad Ali Memon said, “I want to thank Indus Motor for making it possible to live my dream to be the first Asian and first ever in Pakistan to achieve the target of climbing the Seven Summits.

My ultimate vision is to promote mountaineering as a key sport and help young people train and become professionals in this unexplored extreme sport.”  Earlier in 2018, IMC had supported two national athletes, Saadi Abbas, the Asian Karate Champion from Lyari in Karachi and Zainab Barkat, the star wheelchair Table Tennis Champion from KPK, standing by their side in their journey towards the Olympic Games and Paralympic Games in Tokyo 2020.