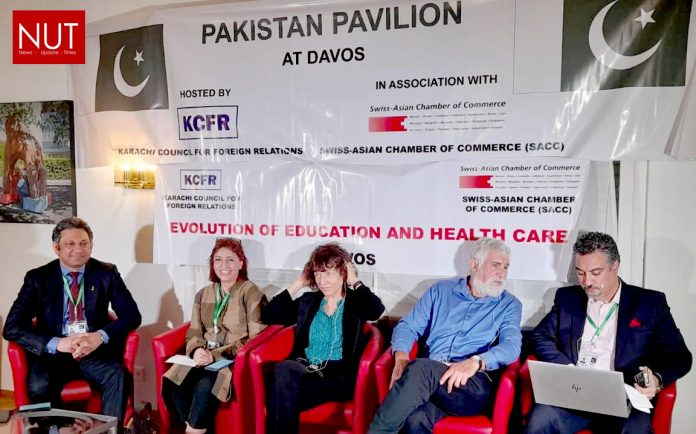 Lahore (Muhammad Yasir) Pakistan needs to invest in the education sector by devising a need-driven strategy allowing the right of education to all, to avert our major problems like economic crisis and extremism. The education system in Pakistan is suffering from severe issues, including commercialism, and to achieve our sustainable goals, an educational emergency is the need of the hour. These views were expressed by eminent national and foreign education and health experts during a panel discussion. The discussion “Evolution of Education and Healthcare” was held on Day 1 at the Pakistan Pavilion during the World Economic Forum. This important discussion session on Pakistan was organized by the Karachi Council on Foreign Relations in collaboration with the Swiss Asian Chamber of Commerce. The panel comprised Dr. Huma Baqai, Senior Vice Chairperson KCFR, Dr. Linda Zangwill, Professor University of California, Dr. Marc Siegel, CEO Siegel Associates, and Mr. Ali Shah, CEO iPath, while senior journalist Faysal Aziz Khan moderated the session. Opening the discussion, Faysal Aziz Khan gave a brief overview of the education system and public health facilities in Pakistan. Sharing the information provided by the government and government agencies, he termed the educational situation in the country as deteriorating and said that Pakistan, at present, had made a global ranking for out-of-school children between the ages of 5 and 16. Pakistan is second only to Nigeria, with a very large number of girls of the same age, about 59%, that do not go to school for various reasons. Faysal Aziz said that the running of the education system in the country had gone into the hands of the private sector which was making this sacred mission a for-profit business. Talking about the public health facilities in Pakistan, he said that 70% of the medical facilities in the country were being provided by the private sector, and that the public sector was under severe pressure in this regard. He said that the medical treatment was one of the basic human needs but it had also turned into a lucrative business. Dr. Huma Baqai, Senior Vice Chairperson KCFR, while shedding light on Pakistan’s deteriorating education system, said that capitalism had destroyed education in Pakistan as we gradually turned education into a privilege instead of a right, and more so how we allowed the private sector to impart the good education by leaving our public sector in shatters. “We are the fifth largest country in the world and we need to impart quality skill-based education to our youth. Pakistan needs a multipronged education strategy and there is no way we can continue with such a limited approach,” she said. Mentioning Pakistan’s low literacy rate, she said that anyone who could read or write his name was considered to be literate, but it was not literacy at all. While expressing deep concern over the precarious situation of the education system, Huma said that education in Pakistan had been made a commercial product instead of a fundamental right which was not acceptable in any way. Dr. Linda Zingwell shared her experiences in health sector management and shed light on modern technologies being used to overcome the problems being faced by health institutions. Dr. Zingwell told the audience that the world was moving towards using Artificial Intelligence in healthcare which would be revolutionizing health services in the near future. Marc Siegel, who also teaches Supply Chain Management at the University of California, suggested that business skills should also be imparted to young graduates so that they might compete in growing markets around the globe. Ali Shah, CEO iPath, shed light on modern-day healthcare system which enables the healthcare professionals to access the personal data of specific patients. He urged the Pakistani authorities to establish National Electronic Heath Record Platform as many other countries around the globe had begun to streamline their healthcare systems. If such a platform is developed, all relevant information of a patient would be accessible by entering their national ID number, he said. He termed the platform as a game-changer in the health sector.